What Google has in store for you when you open up Ad Settings is a compact picture of all your interests. While it learns your age and gender for targeted ads, most of this information is about the same level as to how a one-time acquaintance might know about you.

All that Google is today is because of the ads that it shows you. While Google has been transparent about it, for the most part, the search giant is now making it easier for users to see what its ads have come to know about them. The all-new Ad Settings is the indication and it makes room for demographic data in order for you to find out and select what are the adverts that are shown to you.

The latest material theme redesigning displays all the demographic data that Google has collected in the years that it’s known you for. And if you were someone who was sceptic about what all personal data Google uses to target ads for you, don’t you worry. If the latest announcement is any indication, Google’s ad sorting algorithms aren’t potentially dangerous in any way and I wouldn’t mind sharing it with you as much as I share it with Google.

What Google has in store for you when you open up Ad Settings is a compact picture of all your interests. While it learns your age and gender for targeted ads, most of this information is about the same level as to how a one-time acquaintance might know about you. Being a lover of technology certainly has me addicted to games, computer hardware, camera and audio equipment. 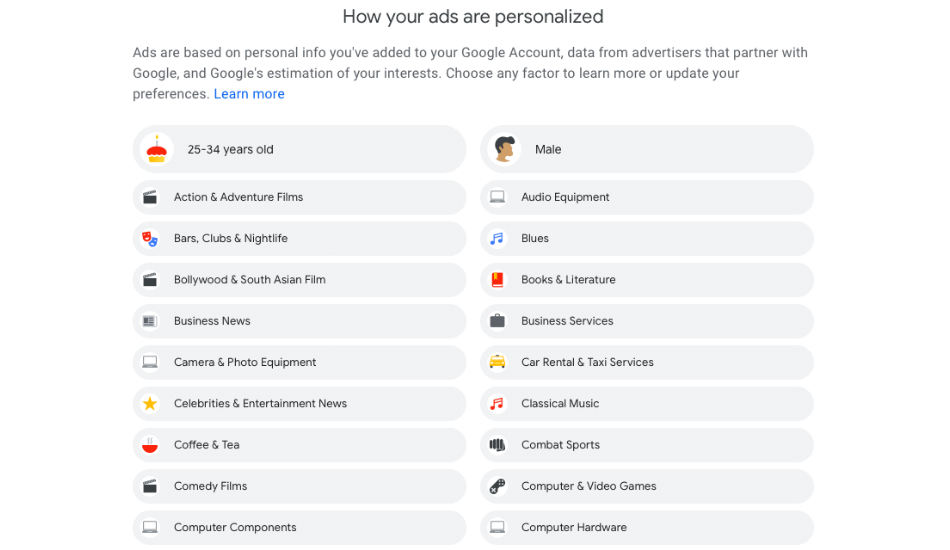 But Google has clearly not done its research well to know that I’m neither a fan of classical music nor am into ‘Celebrity & Entertainment news’. The adverts page also suggested that I’m a fan of Australia and their rugby which is interesting considering I haven’t watched a game of rugby my entire life. Judging by what Google adverts know about me, a person would know more about me from my Instagram or Twitter feed.

That said, Google’s advert algorithms aren’t a scary deal of any sort. We wouldn’t mind being suggested car deals when searching exactly for cars or car parts, would we?

Users can now turn off the categories they won’t be needing ads for which sounds like a sensible option to give when all that’s listed are incorrect assumptions of your interests. Google says “Turning off a factor means you’ll no longer receive tailored ads related to it across our services, and on websites and apps that partner with us to show ads, as long as you’re signed in to your Google Account. The ads you see can still be based on general factors, like the subject of what you’re looking at or the time of day, or any other factor that is still turned on.”

Another feature is what Google calls the “Why this ad?" tool which will now be expanded across all Google services including Gmail, YouTube Maps, and Search. This feature will let users know instantly on why a particular ad was displayed, which maybe be helpful for some but doesn’t scream of any use entirely.

Google Lens now has a standalone app for easier access