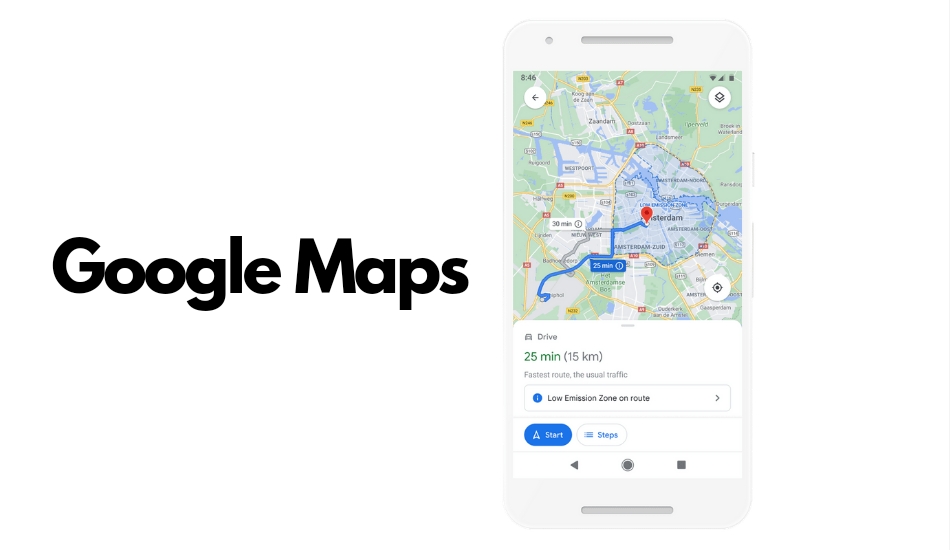 Google is releasing new features for the Google Maps that includes the maps highlighting the journeys that generate the lowest carbon footprint using mainly traffic data and road inclines. The new features are a part of Google’s commitment to fight climate change.

Google is also introducing Live View which is powered by a technology called global localization, which uses AI to scan tens of billions of Street View images to understand your orientation. If you’re catching a plane or train, Live View can help you find the nearest elevator and escalators, your gate, platform, baggage claim, check-in counters, ticket office, restrooms, ATMs and more. Arrows and accompanying directions will point you the right way.

Indoor Live View is live now on Android and iOS in a number of malls in Chicago, Long Island, Los Angeles, Newark, San Francisco, San Jose, and Seattle. It starts rolling out in the coming months in select airports, malls, and transit stations in Tokyo and Zurich, with more cities on the way.

There’s a new weather layer feature, with which you can quickly see current and forecasted temperature and weather conditions in an area,” so you’ll never get caught in the rain without an umbrella”. And the new air quality layer shows you how healthy (or unhealthy) the air is — information that’s especially helpful if you have allergies or are in a smoggy or fire-prone area.

The weather layer will be available globally and the air quality layer will launch in Australia, India, and the U.S., with more countries to come.

With insights from the U.S. Department of Energy’s National Renewable Energy Lab, Google is building a new routing model that optimizes for lower fuel consumption based on factors like road incline and traffic congestion. Soon, Google Maps will default to the route with the lowest carbon footprint when it has approximately the same ETA as the fastest route. In cases where the eco-friendly route could significantly increase your ETA, we’ll let you compare the relative CO2 impact between routes so you can choose.

Eco-friendly routes launch in the U.S. on Android and iOS later this year, with a global expansion on the way.

“From Amsterdam to Jakarta, cities around the world have established low emission zones — areas that restrict polluting vehicles like certain diesel cars or cars with specific emissions stickers — to help keep the air clean. To support these efforts, we’re working on alerts to help drivers better understand when they’ll be navigating through one of these zones. You can quickly know if your vehicle is allowed in the area, choose an alternative mode of transportation, or take another route”, said Google in the blog post.

Low emission zone alerts will launch this June in Germany, the Netherlands, France, Spain, and the UK on Android and iOS, with more countries coming soon.

With the next feature, soon you’ll get a comprehensive view of all routes and transportation modes available to your destination — you can compare how long it’ll take to get there by car, transit or bike without toggling between tabs. Using advanced machine learning models, Maps will automatically prioritize your preferred modes and even boost modes that are popular in your city.