Another Google service is now shutting down. 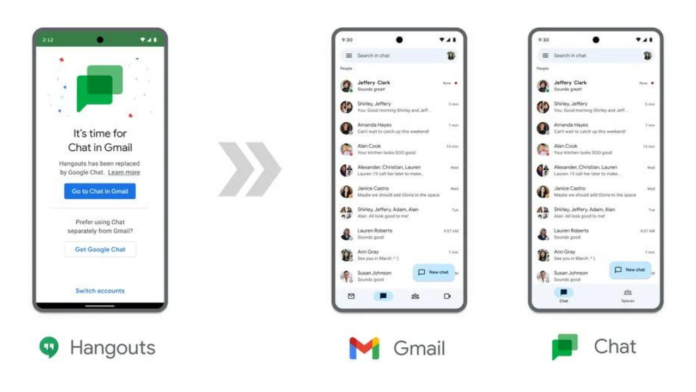 Google is known for sunsetting a lot of its popular services in the past and it is now time for Google Hangouts to face the same fate. Google has announced that it is shutting down its Hangouts chat service for free, personal users. The company says people who still use the Hangouts mobile app will see a prompt to move to Chat.

Why is Google Hangouts shutting down?

Google is shutting down Hangouts as a part of its plan to retire the ageing messaging platforms. Moreover, Google already has a better platform in hand that provides more or less the same functionality to the user. Further, it not only has the latest features but also works better overall.

Apart from that, Google reiterates that Google Chat gets a bunch of advanced features including Spaces, a dedicated place for topic-based collaboration. And, the new integrated view in Gmail makes it easier to use Chat alongside your Gmail inbox, Spaces, and Meet.

“We have big ambitions for the future of Chat, and over the coming months you’ll see even more features like direct calling, in-line threading in Spaces and the ability to share and view multiple images”, says Google.

What happens after Google Hangouts shuts down?

Google mentions that for most people, conversations are automatically migrated from Hangouts to Chat. For those who want a copy of their hangouts data, they can do so before November of 2022.

Users of Hangouts in Gmail on the web won’t get a prompt to switch to Chat until July. Hangouts will remain usable on its desktop site until November, and the company says it will warn users “at least one month” in advance before it starts redirecting the Hangouts site to Chat. The migration process for app users will begin soon when the Hangouts app will point users towards the Google Chat app.

When was Google Hangouts launched?

Originally a feature of Google+, Google’s own social media that also shut down a couple of years back, Hangouts became a standalone product in 2013. At that time, Google also began integrating features from Google+ Messenger and Google Talk into Hangouts. Later on, Google started introducing more features to the app, including voice calling.

Later in 2017, Google started developing two separate enterprise communication products including Google Meet and Google Chat which were a part of its Google Workspace office suite. Google began transitioning Workspace users from Hangouts to Meet and Chat in June 2020 while users of Gmail users began to migrate last year. As a result, Google decides to sunset Hangouts.

Google Hangouts was received well by the users because of cross-platform sync and the amount of features it offered. The chats were synced between iOS, Android and Windows automatically so users didn’t track of their conversations. However, it did have its cons such as tight integration with Google+ which allowed unnecessary sharing of information amongst users.

Hangouts also had a bunch of other competitors out of which one was from Google itself and that was Allo. However, this one shut down at a later date as well. iMessage, Facebook and WhatsApp were all gaining popularity when Hangouts entered the business. Now, one of Hangout’s competitors, Google Chat, is taking over the app.