After ruling the box office for weeks, Alia Bhatt-starrer Gangubai Kathiawadi is all set to release on Netflix now. 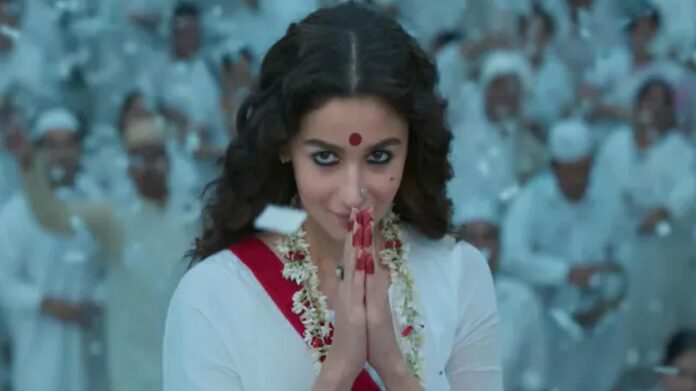 Alia Bhatt-starrer ‘Gangubai Kathiawadi’ has been announced to release on OTT platform this month. The movie will release on Netflix on April 26, 2022.

Netflix India shared the date announcement of the film’s digital release on its official Twitter page. According to a video shared, the film will also be available in Telugu. “Dekho, Dekho chaand Netflix pe aaraha hai #GangubaiKathiawadi arriving on 26th April,” the post read.

Directed by Sanjay Leela Bhansali, the film hit the big screens in India on February 25. Now, the makers have decided to premiere the film on OTT after 8 weeks of its release in the cinema.

What is Gangubai Kathiawadi About?

Gangubai Kathiawadi is a real-life based story of a girl named Ganga from Kathiawad, a small town in Gujarat. She later on becomes Gangubai, a madam in the red light area of Kamathipura. It is said to be loosely based on the true story of Gangubai Harjivandas, popularly known as Gangubai Kothewali. Her life was documented in the book ‘Mafia Queens of Mumbai’ written by S Hussain Zaidi. The movie has been written and directed by Bhansali, and produced by Bhansali Productions and Jayantilal Gada’s Pen India Limited.

Apart from Alia Bhatt, the film also features Ajay Devgn, Jim Sarbh, Shantanu Maheshwari. Other starcast include Vijay Raaz, Indira Tiwari, and Seema Bhargava among others. Huma Qureshi has also appeared in the film for a song. The movie also crossed the 100 crore mark benchmark at the box office.

Talking about his film coming on Netflix, Bhansali said in a prepared statement, “Gangubai Kathiawadi is a very special film for me and we are humbled by the phenomenal response it has received globally. While the film has encouraged audiences to come back to the theatres, I am elated that the film will now reach even wider audience within India and around the world with Netflix.”

Monika Shergill, VP-Content, Netflix India said, “Films are a favourite form of entertainment in India and we want to be the destination for best in class cinema that our members can watch with friends and family on Netflix. As we expand our film slate of original and licensed films, we are thrilled that the iconic film, Gangubai Kathiawadi will soon stream on Netflix. Made with tremendous love by Sanjay Leela Bhansali, and packed with powerful and memorable performances by Alia Bhatt, Ajay Devgn and many others, we hope that our members will enjoy this masterpiece.”