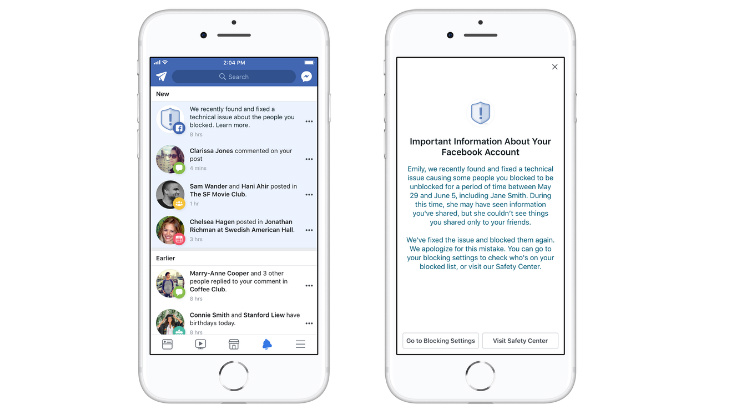 Facebook revealed that the bug was active between May 29 and June 5. The company has confirmed that the issue has now been fixed and everyone has been blocked again. People who were affected will get a notification on Facebook encouraging them to check their blocked list. It has also notified its users about the bug.

Facebook has started notifying over 800,000 users about a bug in Facebook and Messenger application that unblocked certain users who had been blocked by some people. The company has confirmed that it has fixed the bug.

“We know that the ability to block someone is important — and we’d like to apologize and explain what happened,” the company said in a blog post. Facebook revealed that the bug was active between May 29 and June 5.

Whenever a user blocks someone on Facebook they cannot see things user post on his/her profile, start conversations with you on Messenger or add him/her as a friend. Blocking also automatically unfriends them if you were previously friends. “While someone who was unblocked could not see content shared with friends, they could have seen things posted to a wider audience. For example, pictures shared with friends of friends,” Erin Egan, Chief Privacy Officer said.

The company has confirmed that the issue has now been fixed and everyone has been blocked again. People who were affected will get a notification on Facebook encouraging them to check their blocked list.

Meanwhile, Facebook has announced that it is testing a new feature that will allow users to avoid having spoilers in their News Feed. The new feature is called Keyword Snooze and it is currently available for selected users.

The new Keyword Snooze button will be available in the upper right-hand menu in News Feed. Users can use it temporarily hide posts by keywords, which are pulled directly from text in that post.

So, for example, you don’t want to see the spoilers of your favourite series or movie, you need to choose to snooze the word. After that, you won’t see posts in your News Feed containing that exact word or phrase from any person, Page or Group for 30 days. However, the company revealed that it is not foolproof. This is why you get different options like See First, Hide, Unfollow, Snooze etc.