neEV HD electric is equipped with the Exponent’s battery pack known as epack and can be charged from 0-100% in under 15 minutes. 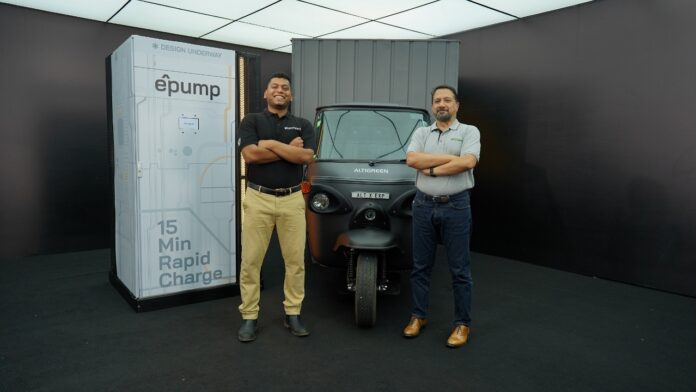 Exponent Energy in partnership with Altigreen Propulsion Labs has launched a new electric 3-wheeler for the Indian market. They have launched the neEV HD electric three-wheeler which is claimed to be the fastest charging electric 3-wheeler.

As per the company’s claim, the vehicle rapidly charges from 0-100% battery capacity within 15 minutes. Customer deliveries will begin in October 2022. Pricing details have not been revealed by the company.

The Exponent Enabled Altigreen neEV HD has an 8.19 kWh epack – a proprietary battery by Exponent. The company says that it is built using regular LFP cell chemistry. This makes this the first rapid charging solution that’s affordable and scalable. The vehicle delivers a city drive range of 80-85 kms and charges up in 15 minutes at Exponent’s epump network.

This is achieved by the epump delivering 600A of current to the epack (15x industry standard) while managing individual cell characteristics including thermals to ensure safety, long battery life, and performance consistency even at 50 degrees Celsius.

The company says that the rapid charging network of 100 epumps will be set up in Bengaluru in Q1 2023. Later other cities will also follow.

With a fresh round of INR 300 Cr investment led by Sixth Sense Ventures, Reliance New Energy, Xponentia Capital, and others, Altigreen is aggressively ramping up its R&D and production capabilities. They have developed a robust pan-India distribution network to offer the best and cleanest last-mile transportation. The same will be used to offer the benefits of Exponent’s 15-minute rapid charging across India.

Exponent energy claimed that after 6 months of joint development and on-road testing with Altigreen, the solution has reached maturity to hit the market. Some of the milestones, according to them, include 5 back-to-back rapid charge cycles on a vehicle for a 400km run on a single day and clocking over 10,000km of city-driving in a 40-day period.