Amazon will add host of cloud services supporting apps and will have the 7 inch tablet run a version of Android built from scratch.

Amazon is reportedly working on a 7 inch tablet that will come loaded with the companyï¿½s own version of operating system. TechCrunch author managed to get his hands on the device and got a confirmation from the company that the tablet will cost $250 (Rs 11,250).

Most likely to be branded as Amazon Kindle tablet, it will carry multi-touch supporting 7 inch colour display, Android operating system, and a bunch of Amazon apps.

The Amazon tablet will carry an operating system built from the scratch using the Android OS code but the prototype unit did not have any cue that indicated presence of Android, visually. The user interface of the tablet will complement to the Amazon.com redesign which is being tested currently.

The tablet will carry all Amazon Apps — Kindle Reader, Amazon Cloud Player, Instant Video Player and the Amazon App Store for apps. From the details so far, it appears that the Amazon tablet will have more of a host of cloud services apps supporting operating system.

Hardware of the tablet would be pretty similar to that of the rival Nook Color. Amazon tablet will have a two finger multi-touch supporting capacitive display and not any e-ink version. The tablet will carry a single core chip and would offer about 6 GB on-board storage. The final version should carry a micro SD card expansion slot as the 6 GB storage is too less for storing multimedia offline. 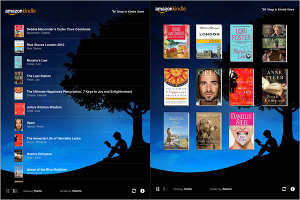 The Amazon tablet would be a WiFi version only as it seems that the company wants a wider reach compared to the headache of carrier tie up. In terms of looks, the tablet appears like the RIM BlackBerry PlayBook but with a rubberised back for better grip. Unfortunately, Amazon wonï¿½t be adding any camera on the tablet.

The upcoming Amazon Kindle tablet will compete with Barnes & Nobles’ Nook Color in terms of pricing and form factor. Apparently this tablet is meant for reading books, watching movies (online) and listening to music. From the details, the tablet does sound interesting to voracious readers who wish to carry several books in digital version while traveling and also enjoy music. Unless the Amazonï¿½s cloud based music and Instant Video services are made available to several countries, the tabletï¿½s fate seems limited to the USA and other select countries.