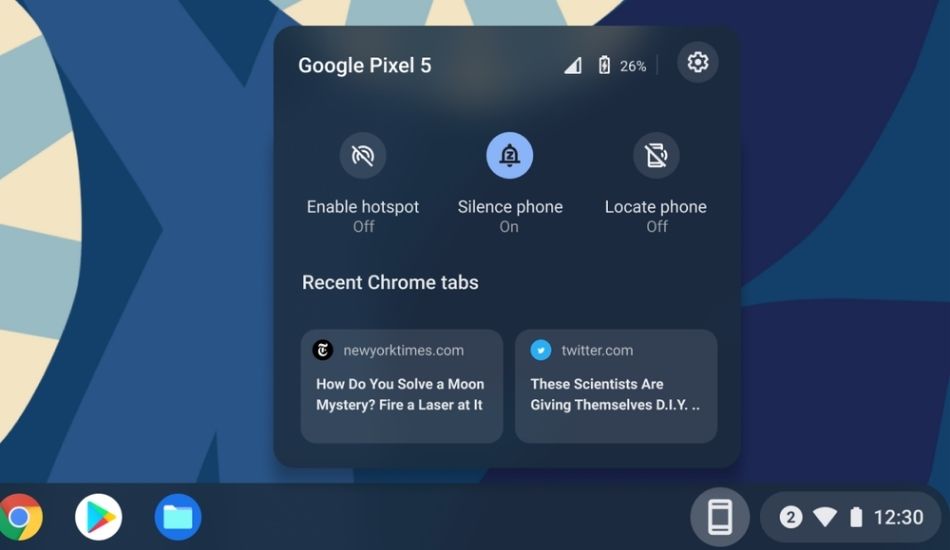 Chromebook has been a part of the world for quite a while now, and even though the platform isn’t as known as other platforms such as Windows or Macs, it has able to establish a name for itself in the market. As a result, Google is celebrating the 10th anniversary of Chromebooks by introducing a new set of features.

Those of you who have a Chromebook are well known about ChromeOS, the operating system on which a Chromebook runs. As its a Google-made software, the company wants to keep chromebooks and Android in sync.

And now it has launched two new solutions that help your Chromebook and Android phone work better together. Google has introduced Phone Hub, with the help of which you now have a built-in control center that brings key capabilities from your Android phone to your Chromebook.

You can respond to text messages, check your phone’s battery life and cellular signal, turn on its hotspot and even locate it, all from your Chromebook. Phone Hub also shows the Chrome browser tabs you last opened on your Android phone, so you can pick up right where you left off.

Google is also extending Wi-Fi Sync to work with more devices, making it easier and faster to get online. Your Chromebook can now automatically connect to trusted Wi-Fi networks you’ve used on your Android phone and other Chrome OS devices when signed in with the same Google Account, no need to enter in the credentials again.

Nearby Share, a feature introduced in Android phones to share various types of files in a quick way, will now also be available for the OS so you can share files between your Chromebook and other Chrome OS or Android devices. The feature will be rolled out in upcoming months.

Google is also bringing a new Screen Capture tool in your Quick Settings menu that lets you take precise screenshots and screen recordings without needing to remember keyboard shortcuts. Once you take a screen capture, it’ll instantly show up in Tote, a new space that keeps important files right at your fingertips.

One can open Tote from the Shelf and they’ll see all their recent downloads, recent screen captures and pinned files. Your media controls are also now built directly into the Quick Settings menu, so you’ll know where to go to play, pause or skip to the next song that you’re playing from the web or an Android app.

Google has also streamlined Chromebook setup for parents and guardians. There’s a new clipboard that saves the last five items. You can press the Everything Button + V to use your Clipboard.

There’s also Quick Answers, which automatically offers helpful information — like a definition, a translation or unit conversion — when you right-click a word. No need to open a separate tab to search for the answer.

There are also many enhancements to the existing features such as Desks, select-to-speak, new icons and much more.