New gaming TWS earbuds by BoAt are all set to launch soon. 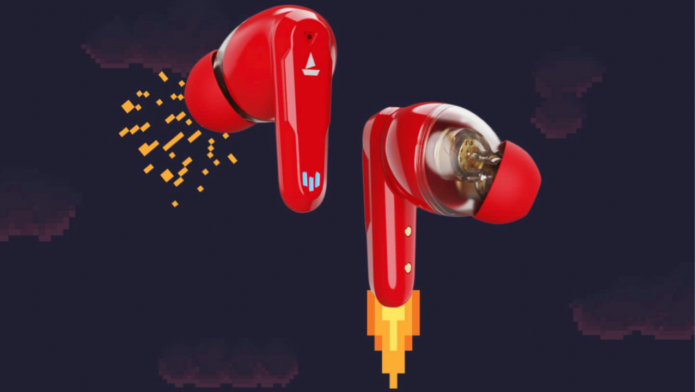 Update 10/06/2022: The BoAt Airdopes 191G have finally launched in India with a price tag of Rs 1,499. It is available for purchase via Amazon, Flipkart, and the company’s official website. Further, they come in Black, Blue, Gray, and Red colour options.

BoAt will soon launch a new set of TWS gaming earbuds called Airdopes 191G. The BoAt Airdopes 191G will have features such as 30 hours of playback time, dual drivers, BoAt’s ENx technology and much more.

The BoAt Airdopes 191G have been spotted on an Amazon Microsite as per which the earbuds will have a transparent design. The earbuds are aimed at gamers and will come in bright red, ceramic white, and dark blue colour options. These TWS earbuds will be powered with 2 X 6mm dynamic dual drivers.

Next, the Airdopes 191G uses Bluetooth 5.2 for connectivity and offers a Beast mode which enabled 65ms low latency mode especially designed for gamers. The Airdopes 191G will have ENx Technology with support for quad mics to tune out of the world’s noise and communicate yourself loud and clear, whether in gaming sessions or voice calls.

The Airdopes 191G will have Insta Wake N’ Pair technology which lets you connect and
disconnect your Airdopes in a jiffy. One can simply open the lid to power on the earbuds and shut the lid to power them off. You also get one touch voice assistant support for Google Assistant and Siri. The buds are IPX5 water resistant while the case has a USB-C port for charging along with breathing LED light.

In related news, BoAt recently also launched Wave Neo smartwatch which features a 1.69-inch HD display with 454 x 454 resolution. In addition to that, the smartwatch has 2.5D curved screen and a peak brightness of 550 nits. Moreover, you can customize your watch face with cloud based watch faces on the Wave Neo. The watch also comes with SpO2 monitoring that measures blood oxygen saturation and a heart rate sensor.