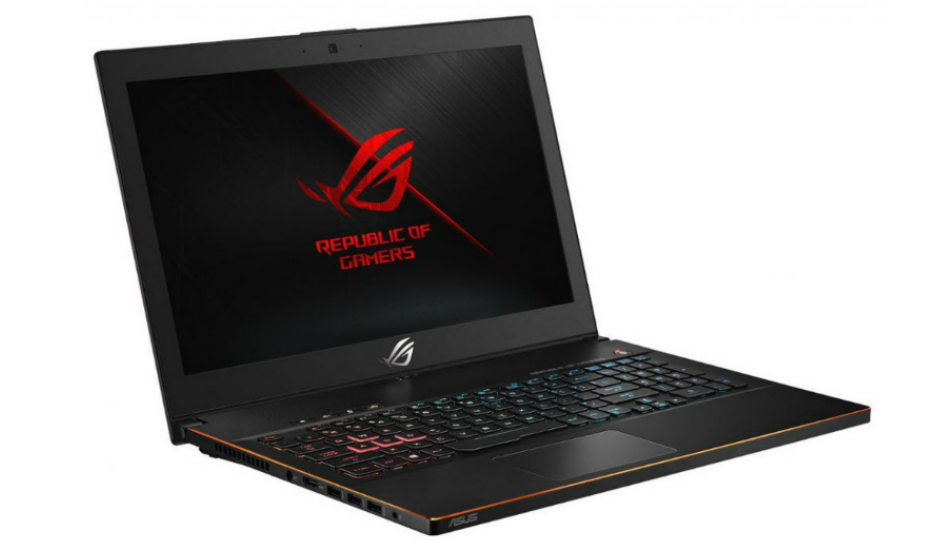 All these notebooks are powered by Intel’s 8th Generation processors with Aura Sync technology for a personalized lighting experience and will be made available from the second quarter of 2018.

ASUS’ Republic of Gamers division has announced the launch of their new range of gaming notebooks, all of which are powered by Intel’s 8th generation Core processors. The Taiwanese giant introduces the ROG Zephyrus M (GM501), Zephyrus (GX501GI), ROG Huracan (G21), ROG G703, ROG Strix SCAR, ROG Strix Hero and ROG Strix GL503 range of laptops as well as the ROG Strix GL12 Desktop, all of which will be pushed before the end of first half of 2018. The Aura Sync technology inbuilt in each of these machines helps gamers personalize lighting according to their choice of the right gaming experience.

First up, let’s talk about what ASUS claims to be the “world’s slimmest gaming laptop”. The Zephyrus M is powered by 8th generation Intel Core processors and an NVIDIA GeForce GTX 1070 graphics that offers a refresh rate of close to 144Hz on an IPS-level display. The notebook is equipped with ROG’s Active Aerodynamic System (AAS) that helps ensure that the laptop doesn’t get heated over prolonged periods of use.

Unlike the Zephyrus M, the GX501GI runs on a Core i7 processor with NVIDIA GTX 1080 as its graphics unit and still maintaining its hold as the world’s slimmest gaming laptop. Its 15.6-inch IPS panel offers a 100 percent colour gamut on sRGB achieving an ultra-responsive screen time of 3ms.

Internally, the Huracan looks a lot like the Zephyrus lineup with an NVIDIA GTX 1080 GPU and an Intel core 8th generation i7 processor. The difference comes in disguise of a 2.5-inch hot-swap bay and a magnetically-secured side cover which allows room for a better cooling performance.

The ROG G703 is the first gaming laptop to be powered by Intel’s Core i9 processor which is also coupled with an NVIDIA GTX 1080 graphics. The laptop features a 17.3-inch FullHD IPS display that produces a 3ms grey-to-grey response time and 144Hz refresh rate. The inbuilt Hyperdrive SSD storage offers speeds of up to 8,700MBps for a better experience while gaming.

The Strix Hero offers Intel Core i7 processors alongside an NVIDIA GTX 10-Series GPU of a user’s choosing. The laptop offers a 130 percent wide view sRGB colour gamut and an N-key rollover with all keys having a durability close 20 million key lifespans.

The Strix G12 is the only desktop released under the ASUS ROG’s newest gaming lineup and it features a Core i7 chipset with GTX 1070 GPU from NVIDIA. There’s a 2.5-inch SSD that would be easy to remove and replace in a matter of seconds.