Asus has announced the new ROG TUF and Strix series gaming laptops that are refreshed with the latest hardware. 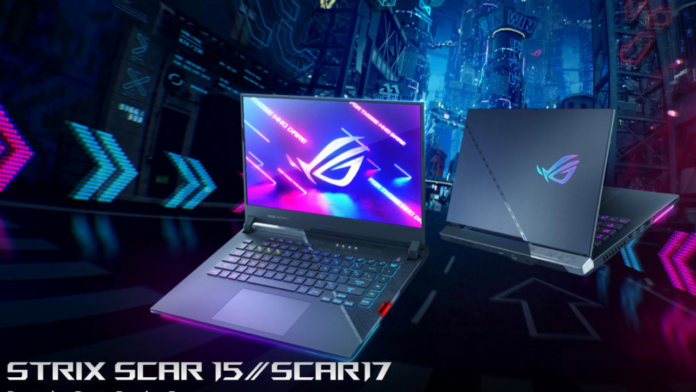 The Asus ROG Strix Scar 15 and Scar 17 come equipped with an Intel Core i9-12900H CPU, up to an NVIDIA GeForce RTX 3080 Ti Laptop GPU in India. It comes with an MUX Switch, and all new DDR5 RAM that helps the hardware reach its full potential with redesigned fans and other liquid metal cooling upgrades. The dedicated MUX Switch helps reduce latency and further increase performance.

The machine offers elevated gaming and viewing experience complimented by QHD 240Hz display, Dolby Vision HDR, and Adaptive Sync. Tailored for your needs, Strix Scar comes with customizable Armour Caps and RGB lighting to add a pop of color to match your gaming style. The laptop supports USB Type-C charging for a quick charge. However, when charged using the supplied 280W power adapter, the SCAR can recharge from 0% to 50% charge in just 30 minutes.

The ASus ROG Strix G15 and Strix G17, incorporate the new ROG gaming laptop DNA, making such designs accessible to all gamers. The upgraded ROG backlit logo and new dot matrix pattern make the laptop stand out from the herd. Housing the AMD Rembrandt up to R9-6900HX along with up to NVIDIA RTX 3070Ti, the Strix G15/17 are engineered to enhance the experience of everyday gamers.

Further, the inclusion ROG Intelligent Cooling ensures efficient thermal management. Moreover, the inclusion of Mux Switch is an added boon for optimal gaming performance. Additionally, both 15” and 17” displays offer users a choice to decide their preferred gaming screen. To offer all overall immersive experience, the Strix G features 2 Smart Amp technology-equipped speakers and fast charge PD technology that can take the Strix G battery from 0% to 50% charge in just 30 minutes.

In addition to the Strix range, ASUS ROG also introduced refreshed TUF F15/17. These also come equipped with the latest 12th Gen Core i7-12700H CPU along with up to NVIDIA GeForce RTX 3060 GPU. Reinforced by the signature military-grade durability, the new F15 and F17 are designed for users looking for a robust gaming device on the go. The device is built to handle any kind of workload from gaming, streaming to content creation.

Equipped with real-time Ray Tracing and AI DLSS, the combination of cores enables realistic in-game lighting and other effects and accelerates content creation tasks like video and photo editing. The new TUF laptops also have an included MUX switch for a competitive advantage in games. With up to 300Hz FHD panel and adaptive-sync, the display’s refresh rate synchronizes with the GPU’s output to reduce lag and produce a smooth immersive gameplay. Further, the QHD panel reproduces “colours exactly as intended and allows for professional-level color-accurate content creation”, according to the company.

Another addition to the TUF family is the new TUF A15/17 with military-grade durability. It comes equipped with AMD’s latest Ryzen 7 6800H processor and with up to NVIDIA GeForce RTX 3060 GPU. The Adaptive-Sync, allows one to keep up with either a QHD 165Hz or FHD 300Hz panel. It also features the MUX Switch that can reduce latency and boost performance by 5-10% on average.

The TUF Gaming chassis has been redesigned for 2022 and is 4.5% smaller than the previous version. It houses a large touchpad with anime-inspired accents and four-way indicators to allow at a glance monitoring of key system information. The machine is armed to handle a high-power CPU with a pair of 84-blade Arc Flow Fans that ensures up to 13% more airflow. The new design has the dual benefit of increasing pressure while reducing turbulence, improving cooling performance without the extra noise.

Moreover, the 90Wh battery paired with the power-efficient AMD processor provides up to 12.5 hours of web browsing and up to 12 hours of video playback, with fast charging technology returning the machine to 50% charge in just 30 minutes.