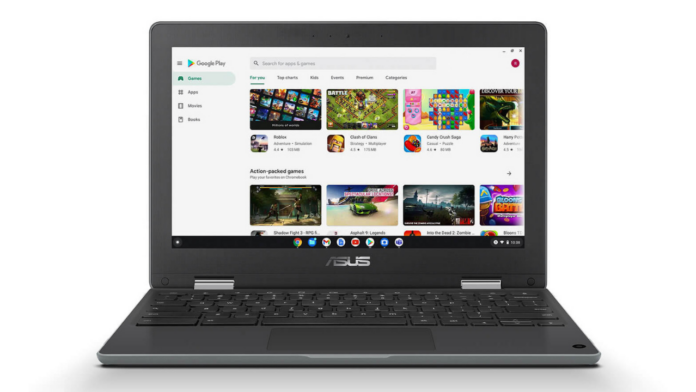 Asus India has launched four new Chromebooks in India. These consist of ASUS Chromebook C214, C223, C423 and C523 in a total of 6 variants. The Chromebooks run on Google’s ChromeOS enabling deeper sync between Android phones and laptops. The ASUS Chromebooks are powered by dual-core 64-bit Intel processors, 4GB of LPDDR4 RAM and day-long battery life.

The new ASUS Chromebook C214 is a ruggedized laptop convertible. The 11.6-inch ASUS Chromebook Flip C214 with its military-grade durability certification is constructed to withstand the everyday knocks.

The Flip C214 also features additional safety features such as a spill and tamper-resistant keyboard. It is rated for 10 million keystroke lifespan. The device is powered by Intel 64-bit dual-core processor and a 50Wh battery. The battery is claimed to last up to 11 hours. It features 64GB of onboard storage that can be further upgraded up to 2TB using a MicroSD card. There’s 4GB of LPDDR4 RAM.

The laptop gets a 360-degree hinge, touch screen display with a 720p front-facing camera as well. In addition, there’s a 5-megapixel rear camera along with dual stereo speakers.

Intel 64-bit dual-core processor powers the device with 32GB of onboard storage on the C223 and 64GB on C423 and C523. It can be further upgraded up to 2TB using a MicroSD card. The laptops have 4GB of LPDDR4 RAM. All of them have stereo speakers and an HD front-facing camera.