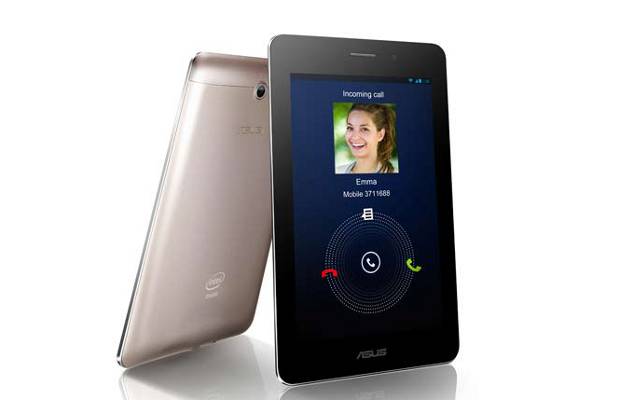 Based on Intel's Z2420 chipset, the Asus Fonepad is definitely going to be a new competition for the Indian tablet market.

Asus’s first ever cellular calling based Android tablet, the Fonepad will hit the UK market on April 12 for Â£179.99 or around Rs 15,000, according to reports.

The tablet, which was unveiled during the Mobile world Congress last month, is also likely to hit the Indian market this month itself considering Asus’s past few product launches.

However, Asus has not revealed the availability and the price of the Fonepad in India.

The Asus Fonepad is based on Android 4.1 Jelly Bean and is powered by Atom Z2420 processor running at 1.2 GHz. The tablet has all the features of a smartphone including voice call and 3G support.

Asus Fonepad features a 7 inch IPS panel with HD 1280 x 800 resolution. It has 1 GB RAM and comes in 8 GB and 16 GB storage variants. It also has a slot to accommodate a micro SD card of up to 32 GB. Besides, Asus is also offering 5 GB of cloud storage.

The Asus Fonepad also comes with a front 1.2 megapixel camera and a 3 megapixel autofocus rear camera with 720p HD video recording capability. The tablet can also be used for voice calls using the built-in earpiece along with the noise-cancelling digital microphone or by using a Bluetooth headset.

If priced appropriately, the Asus Fonepad will give tough competition to many SIM calling tablets including the Samsung Galaxy Tab 2 P3100.