Asus has refreshed its laptop lineup with the latest of AMD and Intel, including Chromebook Flip CX5 that has 12th Gen Intel CPU. 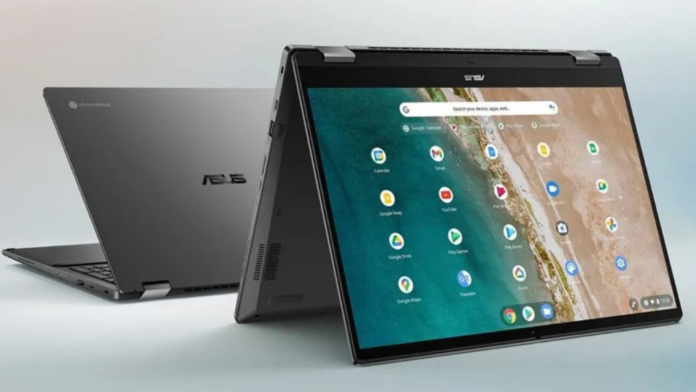 Asus has announced a bunch of new laptops at CES 2022 with updated Intel and AMD hardware. It has refreshed its existing TUF and ROG series of laptops and has also announced a new Chromebook Flip CX5 that comes with high-end internals including 12th Gen Intel Core i7 CPU.

The Chromebook Flip CX5 sports a 16-inch Full-HD display with touchscreen support and 16:10 aspect ratio, 87 percent screen-to-body ratio. There’s a 360-degree ErgoLift hinge that converts the device in to a tablet. It is powered by the latest 12th generation Intel Core i7 processor with vPro and gets up to 16GB of LPDDR4X RAM and up to 512GB of PCIe NVMe SSD storage.

Connectivity options include Wi-Fi 6E, 2 x Thunderbolt 4 ports, 1 x HDMI 2.0 port, 1 x USB 3.2 Gen 2 Type-A port, 1 x 3.5mm headphone jack, and a microSD card slot. Asus says that the Chromebook also has a MIL-STD 810H tested chassis and also features a Full HD webcam with a privacy shutter that covers the sensor when its not in use. Additionally, you also get Harman Kardon-certified four speaker system.

New for 2022, all TUF Gaming laptops feature a hardware MUX switch. Many modern gaming laptops route their GPU’s frames through the CPU’s integrated graphics before reaching the display, which offers better battery life but prevents the GPU from giving its absolute best performance. The latest TUF Gaming laptops allow gamers to switch to a direct GPU mode (via Armoury Crate software), reducing latency and boosting performance by 5-10% on average.

Further, as part of the cooling system, the Arc Flow Fans feature an 84 blade design, with individual blades varying in thickness. By adjusting the thickness down to just 0.1 mm at the end of the blade, turbulence is reduced while improving overall airflow. Despite being quieter than last year’s design, these fans provide up to 13% more airflow than their predecessor. All 2022 TUF laptops are equipped with high refresh rate display options, including FHD 300 Hz for the fastest competitive shooters or QHD 165 Hz for more immersive experiences.

Featuring the 12th Generation Intel Core i7-12650H processor and up to an NVIDIA GeForce RTX 3070 Laptop GPU with a MUX switch, this machine is capable of high-end gaming. New DDR5 memory running at 4800 MHz can breeze through even the most intense multitasking, and dual PCIe Gen 4×4-capable SSD slots ensure that gamers will have more than enough high-speed storage while on the go.

Under the hood, the ROG Strix SCAR comes with up to 12th-Gen Intel Core i9-12900H processors. The gaming laptop comes with an Nvidia GeForce RTX 3080 Ti GPU, PCIe 4.0 storage, and DDR5 memory for a faster and efficient experience.