The new Apple iOS 6.0.1 update that addresses the glitches with display, WiFi, keyboard and fix for other bugs.

Apple has pushed a new iOS 6.0.1 software update over the air for the iOS 6.0 running devices. This new software update is more like an incremental version to fix the issues that cropped up after iOS 6.0 was released.

Severely bothering issues such as the Exchange Meeting bug, keyboard glitch, camera flash bug and more have been addressed through this update. Apple has also packaged an iOS update tool along with this update to ease up the process.

Early adopters of iPhone 5 should immediately download and install the iOS 6.0.1 software update as it fixes several glitches that could hamper the usage experience. However, for that users will have to plug their iPhone 5 with iTunes on desktop. Reason is a silly bug that prevents iPhone 5 from installing software updates. Besides that, the update also improves reliability of WiFi connection when connected to the encrypted WP2 protection bearing networks. 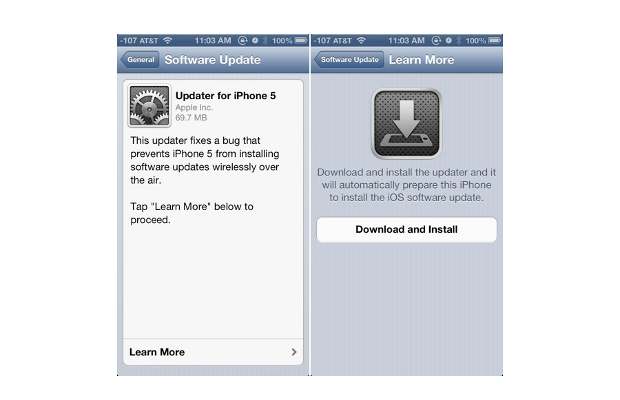 The iOS 6.0.1 update solves a really annoying bug related to Exchange Meetings – which is basically if one user declines the invitation entire meeting would get deleted. For the imaging enthusiasts, this update fixes the issue where the flash would not go off even when disabled from the camera app.

The horizontal lines displayed on the keyboard are now fixed and the iTunes Match now shows a Consolidated the Use Cellular Data switch.

We recommend installing this update through the iTunes for Mac or PC which can be downloaded from here.