Here is a head to head comparison of two iconic devices of this era. 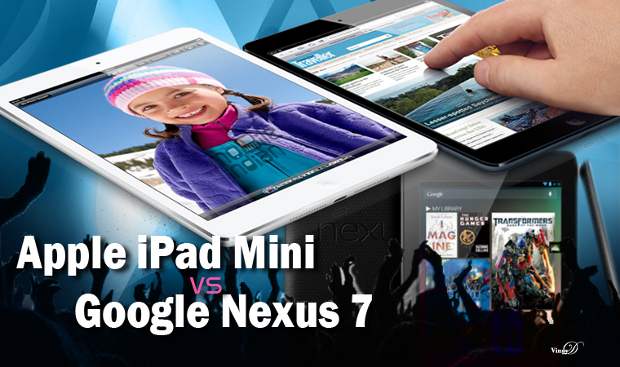 Here we compare these two iconic tablets, which are certainly considered the best in their segment. Please note that there are several versions of the iPad Mini as well as the Google Nexus 7, but only the models we are reviewing here are comparable in price.

Clearly, the iPad Mini is a bit big and wider than Nexus 7, but it is thinner and lighter than the Google tablet. The Apple tablet’s big profile comes from its 7.87 inch display while the Nexus 7 has a 7 inch display.

As mentioned earlier, Apple iPad Mini has a bigger 7.87 inch display as compared to the 7 inch display of Nexus 7, but the difference is quite minor so it is not noticeable.

In Google’s Nexus 7, you will find a high definition display with 1280 x 800 pixel resolution. It has been made with In Plane Switching (IPS) technology, so expect a wide angle of viewing. The iPad Mini’s display too has been made using IPS technology, but it offers lower-1024 x 768 pixel-resolution.

Apple has also provided a fingerprint-resistant oleophobic coating on the screen of the iPad Mini. Not much is known about the Nexus 7, and since we have not used any of these devices, we are not able to comment on the finer points, but we expect the difference to be too minor to be noticeable.

The iPad Mini has an upper edge in this arena. The Apple tablet comes with dual cameras – there is a 5 megapixel auto focus camera in the rear with f/2.4 aperture, which is said to be good for low light photography and brings a lot of sharpness to the picture. For video chatting there is a 1.2 megapixel camera in the front of the iPad Mini. On the other hand, the Google Nexus 7 has only a 1.2 megapixel front camera.

Here though, the Nexus 7 turns the table on Apple iPad Mini as it comes with 32 GB onboard memory as against iPad Mini’s 16 GB. Please note that the iPad Mini comes in 32 GB and 64 GB versions as well, but we have considered its 16 GB version as it costs the same as the 32 GB version of the Google Nexus 7. Neither of them comes with an external storage option.

Apple iPad Mini comes with a dual core A5 processor while the Google Nexus 7 has Nvidia’s quad core Tegra 3 processor. As per analysts, the Apple chip does better when it comes to graphics, so gaming is expected to be better on the iPad Mini.

On the other hand, the Nvidia chip is said to be better than the A5 at data-crunching and power efficiency. The Apple iPad Mini comes with iOS 6 and the Google Nexus 7 comes with Android 4.2 Jelly Bean operating system. Both are diametrically different. For instance, the iOS has more and better games than the Android. However, though iOS has better apps as well, the spectrum of apps is not as wide as on Android. In Android, you have ÂµTorrent’s app too, which you should not expect from iOS.

Also, jail breaking the iPad Mini to download non-market apps would void your warranty, but with Android, you need not worry about that while installing a non-market application on the Nexus 7. The biggest difference between the Nexus 7 and iPad Mini is the maps application. It is widely accepted that Google Maps (for Android) is far better than Apple’s own maps application. Customisation is also easy and acceptable on Android but not on iOS 6.

The Apple iPad Mini comes with a 16.3 Watt Lithium polymer battery, promising 10 hours of web surfing over WiFi. The Google Nexus 7, meanwhile, has a 4325 mAh battery that is said to give eight hours of operational life with each recharge.

Both devices offer WiFi connectivity. Besides, Google has provided Bluetooth and NFC in the Nexus 7; while the Apple iPad Mini comes with Bluetooth but no NFC.

Both are niche products of the respective companies. The Apple iPad Mini in a nutshell is a good tablet for gaming not only because it has a bigger display than the Nexus 7, but its A5 dual core processor also provides better graphics output. The iOS app store has better games than Android in terms of quality as well as quantity.

The Google Nexus 7 is a balanced tablet with more connectivity options (NFC) and options for customization, which is not allowed in the Apple tablet. Android also has a greater variety of applications, and not to forget the superiority of Google Maps over Apple Maps. Plus, you will get a 32 GB storage slot in Nexus 7 as compared to only 16 GB in the iPad Mini.