As per the report from Canalys, Indian personal audio market grew 62% in Q3 2021, with 16.6 million units shipped. 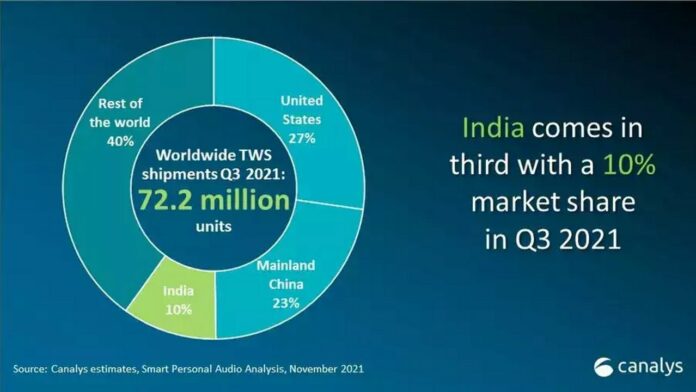 The true wireless stereo (TWS) earbuds demand in India is continuing to rise. A new report has revealed that Apple has dominated true wireless earbuds shipments in India in Q3 2021.

Apple at No. 1, Samsung follows

Apple has maintained its leading global position in TWS. The brand has shipped 17.8 million AirPods, but its shipments declined by nearly a third compared with a year ago. This is primarily due to a significant drop in demand as consumers waited for the third-generation devices.

Meanwhile, Samsung has regained second place. The brand is backed by a strong performance from the debut of the Galaxy Buds2.

Xiaomi has moved to third place. India’s local king, boAt, broke into the top five for the first time, shipping 2.8 million units. And Edifier was close behind with 2.7 million units.

“India has reached a new milestone as the country solidified its position as the third-largest TWS market with a market share of 10%. The strong performance is thanks to local brands, such as boAt, Noise and Boult, as well as smartphone players, such as Realme, rapidly growing their TWS shipments” said Canalys Research Analyst Ashweej Aithal.

There is continuous competition for the brands as they try to capture the rising TWS demand. “Audio players, such as Jabra, Sony and JBL, are now taking an increasingly aggressive stance by peppering TWS models across a range of price points,” said Canalys Research Analyst Sherry Jin. “These players are pressured to lower the average selling price of their TWS devices to make themselves competitive in the market. Together with the release of the third-generation AirPods, the global TWS market is expected to return to robust growth in Q4 in time for the holiday season.”