Android Gmail app gets an update

Google has pushed yet another update for the Gmail app for Android to make some improvements in the app.

Google has pushed a new update for the Gmail app to add some features to the settings and improve overall performance of the app. The new Gmail Inbox interface bringing update was the last one pushed for the Android platform users. The update brings back the Delete button which returns to the top of the window for quickly deleting the mails.

Gmail app for the Android devices had received new Inbox interface showing tabbed allocation of the emails by variety. However, this update did remove the usual Delete button that appeared on the top of the window. The same dustbin like Delete button is back on the panel so that the users don’t have to hunt for it. 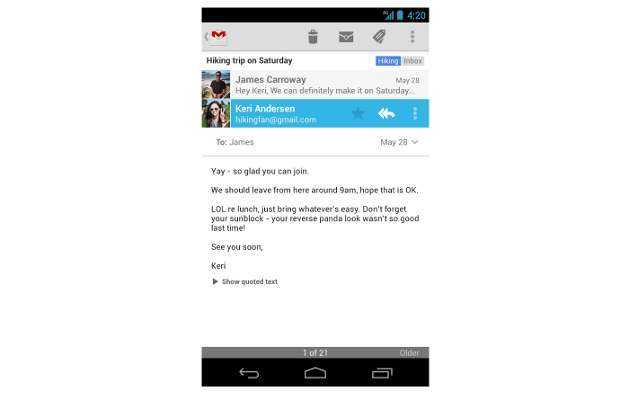 The sender images can now be touched while selecting several emails at the same time. Apart from that, there are several bug fixes in the Gmail update.

Finally, the settings for archiving and deleting emails have been improved with the new settings meant to be used with swipe gestures.

The updated version of the Gmail app is available from the Google Play store.