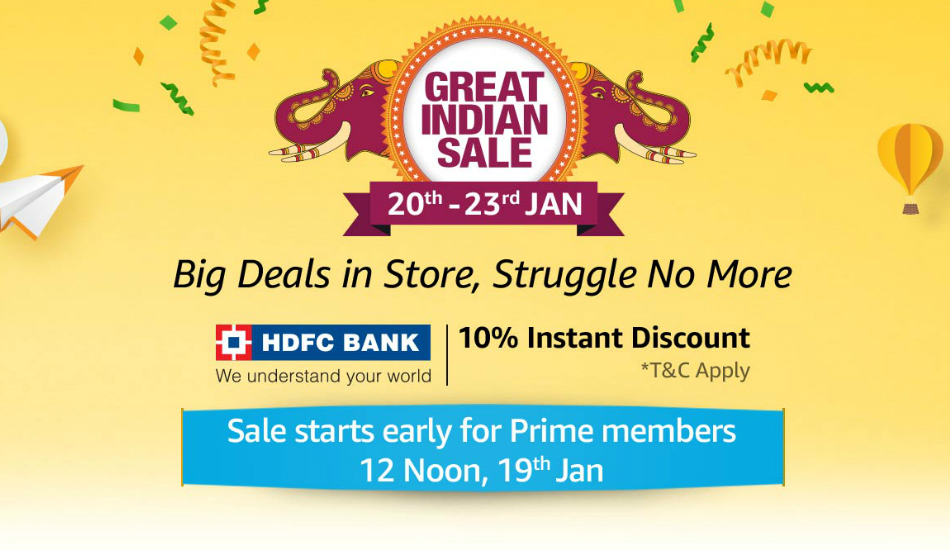 The four-day sale will offer deals on smartphones, laptops, camera, electronics, home appliances and more with over 170 million products to choose from.

Amazon India has announced the Great Indian Sale for its customers, which is scheduled to be held between January 20 and January 23. The four-day sale will offer deals on smartphones, laptops, camera, electronics, home appliances and more with over 170 million products to choose from.

Amazon has partnered with HDFC Bank to offer a 10 percent instant discount when making transactions via an HDFC debit or credit card. Bajaj Finserv will also be offering no-cost EMI options as well as special exchange deals on several products.

Amazon will also give its Prime members early access to the Great Indian Sale to shop from January 19 at 12 PM, a full 12-hour advantage over regular users. Speaking about the deals on offer, Amazon has already teased that it’ll be offering the OnePlus 6T at an “unbeatable exchange offer” at Rs 37,999 for the 6GB/128GB version. The 8GB RAM and 256GB storage variants will be available for Rs 41,999 and Rs 45,999 respectively. The Redmi Y2 and Huawei Nova 3i will be sold for Rs 8,999 and Rs 20,990 respectively.

TVs and home appliances are also getting huge discounts of up to 70 percent. Amazon is offering up to 50 percent discount on Smart TVs, 32-inch TVs, OLED 4K TVs with up to Rs 22,000 off on exchange. The e-commerce giant will also bring discounts on over 50 lakh book titles, no-cost EMI options on video game consoles, discounts on its own brand of products including Amazon Basics, Fire TV stick, Kindle and Echo devices.

The Amazon Great Indian Sale will go live from January 20 to January 23 with early access for Prime Members from 12 PM on January 19.