Amazfit GTS 4 is all set to come to India soon with more than 150 watch faces and always-on display styles. 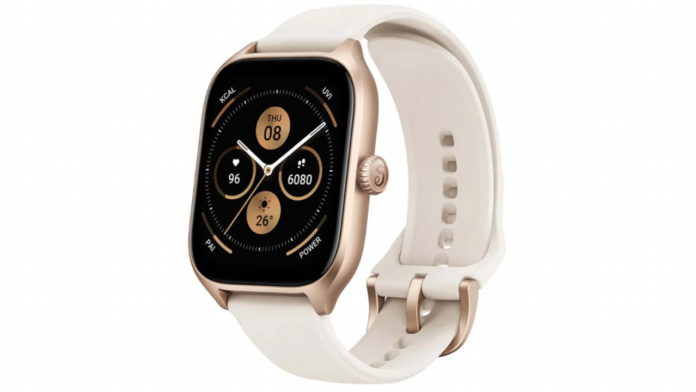 Amazfit unveiled the GTR 4 and GTS 4 smartwatches globally last week, and the brand has now confirmed the India launch of the latter. While there’s no exact launch date, we can expect the Amazfit GTS 4 to arrive in India soon. The brand also confirmed what features the smartwatch will come with.

The confirmation comes via an Amazon India microsite as per which it will come with a 1.75-inch AMOLED display fitted in a square dial. The watch comes with over 150 watches’ faces and always-on display options for customisation. The watch further features a dual-band circularly-polarized GPS antenna for precise real-time GPS tracking.

The company says that it will soon offer the ability to import route files and navigate them in real time via an OTA update. Next, there’s support for over 150 sports modes where the watch can automatically recognise 15 strength training exercises and eight sports movements.

It has the BioTracker 4.0 PPG sensor using which the watch can monitor blood oxygen, heart rate, and stress levels 24/7. It runs on Zepp OS 2.0 that features two in-built games, GoPro support, and Home Connect third-party apps. They also come with inbuilt Amazon Alexa and also feature an offline voice assistant.

The watch supports Bluetooth calling for which there is an inbuilt microphone and speaker. Users can also store music on the smartwatches or use them to control music streaming on their smartphones. The watch is claimed to last up to 8 days and also has a new battery saver mode.

Meanwhile, the brand also unveiled the GTR 4 alongside the GTS 4 last week. Amazfit GTR 4 sports a 1.43-inch AMOLED display with an HD resolution. The watch is built with a metallic mid-frame. Further, the watch is equipped with a 24-hour heart rate monitor, SpO2 sensor, and a stress tracker. It is capable of monitoring sleep patterns and breathing quality at night.