Amazfit GTR 4 smartwatch has been announced. It supports voice commands via the built-in Alexa Voice Assistant. 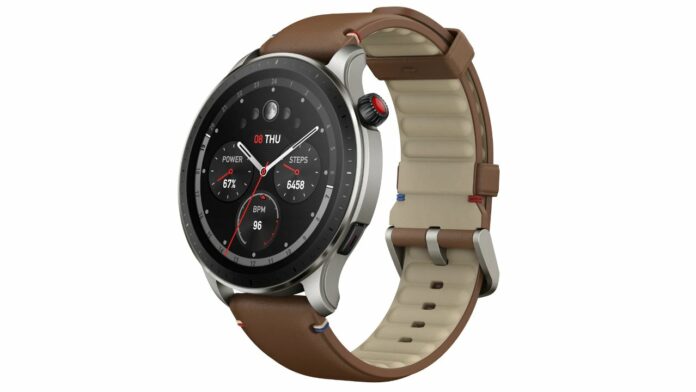 Amazfit has announced the new Amazfit GTR 4 smartwatch. The new smartwatch sports a 1.43-inch AMOLED screen, over 150 sports modes, up to 14 days of battery life and more.

The Amazfit GTR 4 smartwatch is priced at €199.99 in Europe which is approx. Rs 15,920. The pre-orders will be available starting on September 2 in Germany and Poland. For other regions, details will be announced later. It comes in Superspeed Black, Vintage Brown Leather, and Racetrack Grey colours.

The Amazfit GTR 4 sports a 1.43-inch AMOLED display with an HD resolution. The watch is built with a metallic mid-frame. Further, the watch is equipped with a 24-hour heart rate monitor, SpO2 sensor, and a stress tracker. It is capable of monitoring sleep patterns and breathing quality at night.

The watch has support for tracking over 120 sports modes along with automatic recognition for a few of them. The wearable device also packs BioTracker 4.0 PPG biometric optical sensor.

Next, the new watch supports voice commands via the built-in Alexa Voice Assistant. As for battery life, the company claims that the smartwatch will offer up to 14 days with regular use after a full charge. Additionally, the GTR 4 has dual-band GPS with access to five satellite systems, which Amazfit plans to increase to six via a future firmware update.

Recently, Amazfit Band 7 with 18-day battery life was launched. It comes with an HD AMOLED display, 24/7 heart rate and blood-oxygen monitor. There’s support for in-built Amazon Alexa. The wearable is can deliver up to 18 days of battery life with typical usage and up to 28 days with battery saver mode.

The Amazfit Band 7 comes at $49.99 (approx Rs 3,650) and can be purchased from Amazfit official website in Beige and Black colour variants. The company is also offering additional strap colours options including Blue, Green, Orange and Pink.