Amazfit has announced that a new version of the GTR 2 Smartwatch will launch in India on May 23. 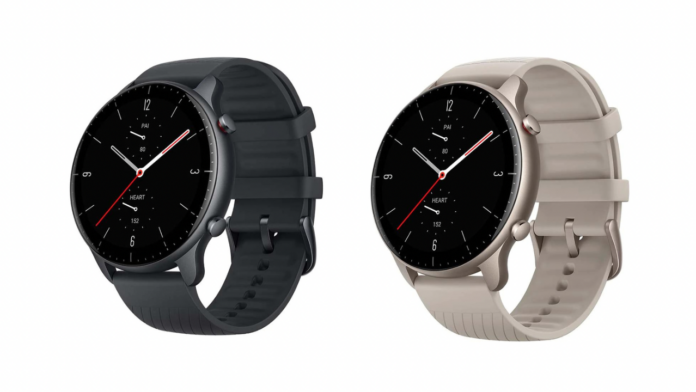 Amazfit GTR 2 New Version has been launched in India. It is a redesigned model of the Amazfit GTR 2 smartwatch and will go on sale in India on May 23. While the specifications remain similar to the original version, Amazfit says that the new version of the wearable will have a few changes in design, and capabilities.

Amazfit GTR 2 (2022) new version will retail in India with a starting price of Rs 11,999. The brand is also announcing a special launch price of Rs 10,999 which is only valid on 23rd May. It will go on sale via Flipkart and the company’s own website in Black and Grey colour options.

The Amazfit GTR 2 features a 1.39-inch circular AMOLED display with a resolution of 454 x 454 pixels and up to 450 nits brightness, scratch-resistant diamond-like carbon coating. The watch is compatible with Android and iOS devices. The watch also has a sleep tracker as well.

Amazfit GTR 2 comes with 5ATM certification, which means it is waterproof up to a depth of 50 meters. A 471mAh battery fuels the smartwatch. The company claims that it will offer up to 11 days of battery life, up to 38 days of battery life in basic watch mode. It also has support to answer phone calls.

Back in April, Amazfit also launched a new version of the GTS 2 Mini smartwatch in India. The Amazfit GTS 2 Mini New version, despite its name, looked identical to the older version of the watch but with a new colour option being added which was Breeze Blue.