Moto E20 renders have now appeared online which suggest the phone will come with a 3.5mm headphone jack, and a Google Assistant button. 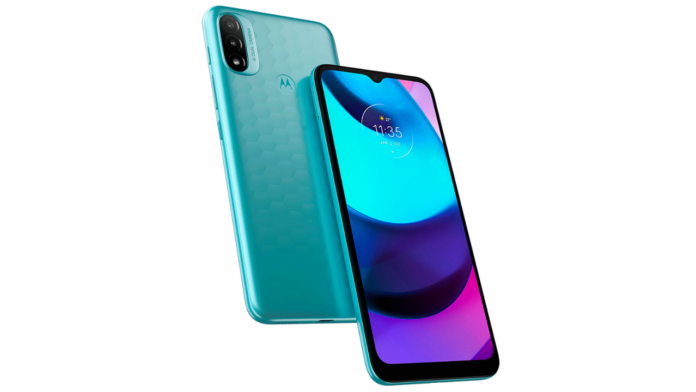 Motorola is working on a bunch of new products including the Moto E20, Moto E40, and the Moto G50 5G. The Moto E20 out of these seems to be a budget smartphone, the expected renders for which, have now appeared online via a new leak. Considering the E series has been reserved for entry-level smartphones, the Moto E20 could very well be one.

The renders for the Moto E20 have been leaked by tipster Evan Blass on Twitter. However, he says to ‘Name the phone’ and by the looks of it, the phone does look like an upcoming E-series device from Motorola. Further, the smartphone has a water drop notch at the front that will house the front facing camera.

On the back, there seems to be a dual camera setup on the Moto E20 per the leaked renders. Moreover, there’s a hexagonal pattern on the back along with three buttons on the side. These seem to be the power button, volume rocker and a Google Assistant button. It’s not clear whether the Motorola logo at the back also acts a fingerprint sensor or not.

The SIM card tray resides on the left while on the top, you get a 3.5mm headphone jack. The bottom side of the device seems to feature a speaker grille, a mic and a USB port. The Moto E20 has also appeared on certification websites such as Brazil’s Anatel certification agency, Bluetooth SIG, and TUV Rheinland with the model number XT2155.

As per these listings, the device has Bluetooth 5.0 and packs a 3,760mAh battery with 10W charging support. In a previous leak of Moto G50 5G renders, Blass mentioned that the Moto E20 is codenamed ‘Aruba’. Speaking of Moto G50 5G, per a recent leak, the phone will sport a 6.5-inch HD+ display with 720×1,600 pixels resolution.