The tablets run on Android 6.0 Marshmallow.

Alcatel has launched its Pixi 4 (7) tablet in India. The tablet comes in two variants – 4G and Wifi priced at Rs 6,499 and Rs 3,999 respectively. Both the tablets are available for purchase exclusively on Flipkart and come in Volcano Black and Smokey Grey colours.

The Alcatel Pixi 4 (7) 4G variant offers a 7-inch display with 1024 x 600 pixels resolution which is powered by a 1.1GHz quad-core MediaTek MTK8735D processor coupled with 1GB of RAM. The tablet has 16 GB of inbuilt memory as well as an expandable storage slot that can hold a micro SD card of up to 64 GB. 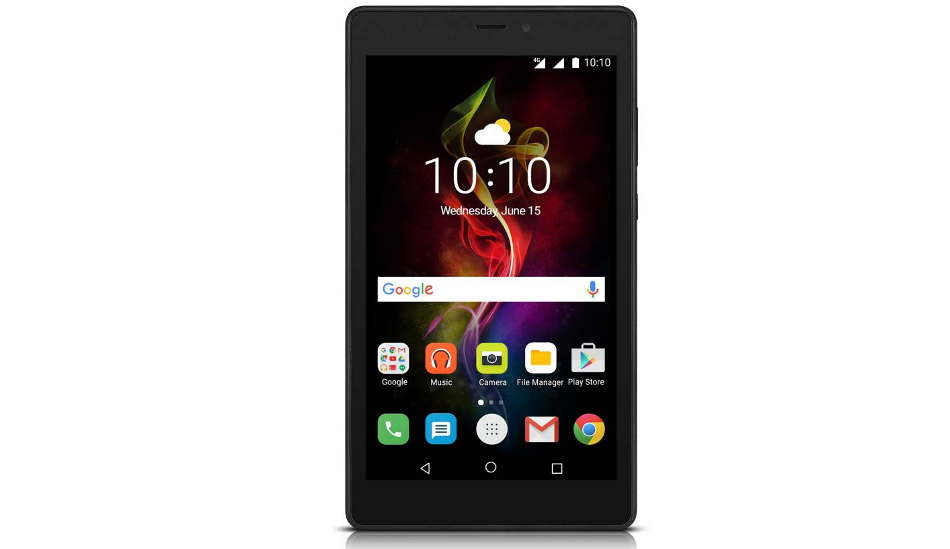 The tablet has a 4000 mAh battery and has connectivity features like WiFi (b/g/n), Bluetooth, 3.5mm headphone jack and micro USB 2.0 port. The device sports an 8-megapixel shooter on the back and has a 5-megapixel front camera.The tablet measures 190.2 x 106 x 8.9mm, and weighs 260 grams.

The WiFi variant lacks 4G LTE support and comes with a lesser battery and downgraded camera. The Wifi varaint is powered by a 1.3GHz quad-core processor coupled with the same 1GB of RAM. It has 8 GB of inbuilt memory with an expandable storage slot that can hold a micro SD card of up to 32 GB. The device measures 189.2 x 107.6 x 9.15mm and weighs 250 grams.

The Alcatel Pixi 4 (7) WiFi variant comes with a 2MP camera on the back and a 0.3MP camera in the front. This variant of the tablet features a 2580mAh battery. Both the tablet run on Android 6.0 Marshmallow.