Users will have to recharge the said amount via Airtel Payments Bank and they will be entitled to receive Rs 50 cashback over a period of seven months.

Bharti Airtel is offering 100 percent cashback on recharge of Rs 349 for prepaid users. This is a limited period offer, though the brand has not revealed when it will end it. 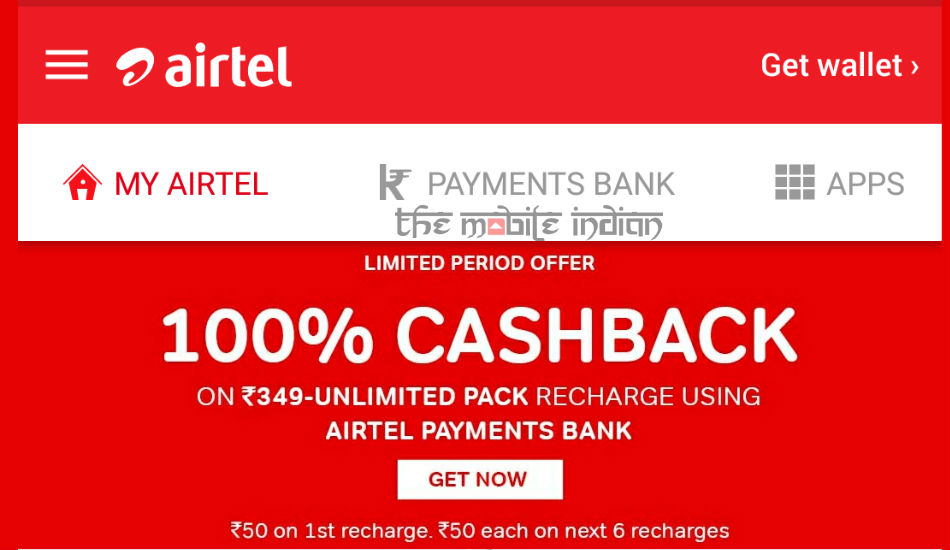 Under this offer, users will have to recharge the said amount via Airtel Payments Bank and they will be entitled to receive Rs 50 cashback over a period of seven months. The amount will be added to the Airtel Payments Bank account, and the cashback will be used as a discount when they purchase the next recharge. The cashback will be automatically applied while buying a recharge and it will be restricted to once in a month.

However, users will be able to use the refund money for other transactions as well. For the unintended, with the recharge of Rs 349, users will be 28GB of data with a FUP limit of 1GB per day. The phone comes bundled with free local and STD calls, though users will get a limit of 1000 minutes of calls per week. Once the limit is exhausted, the calls will be charged 10 paise per minutes for calls made on Airtel numbers and 30 paise per minute for calls made on other networks. The plan comes with a validity of 28 days.

The offer is similar to Reliance Jio Dhan Dhana Dhan offer, which it introduced during Diwali time. Under this offer, users who recharged with Rs 399 plan will get 100 percent cashback. Jio users will get eight cashback vouchers of Rs 50 in My Jio app, which makes a grand total of Rs 400. Users can redeem these vouchers against the future recharge of Rs 309 or above and Rs 91 or above on data add-ons. However, there is a catch. Users can only avail these redemptions after November 15, 2017. Additionally, one can use a cashback voucher one at a time and not all at ones.