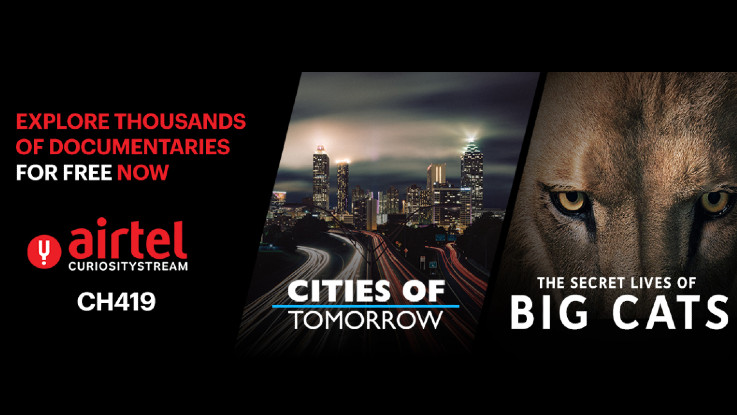 Airtel Digital TV has launched an exclusive Free to Airtel channel with the full catalogue of CuriosityStream’s films and series.

Bharti Airtel has announced that it has partnered with CuriosityStream to bring the content from the latter to Airtel Digital TV in India. The company says it is the for the first time that DTH homes will get direct access to content from CuriosityStream.

The list includes Breakthrough, a new series based on Coronavirus. Apart from this, it will feature Stephen Hawking’s Favorite Places, Butterfly Effect: Gandhi-The Force of Willpower, David Attenborough’s Light on Earth, Asia’s Monarchies: Nepal, Age of Big Cats and more. CuriosityStream is also available to Airtel customers on the Airtel Xstream app.

Commenting on the partnership, Sunil Taldar, CEO – DTH, Bharti Airtel said, “We brought CuriosityStream content to India about six months back on our mobile platform offering our customers the exciting array of exclusive content. Today, we are further strengthening this partnership to become the first and only DTH provider in India to offer the content to customers on their television via the set-top-box enabling easy access to all the exclusive content to the entire family. As a brand, we are always innovating to expand our offerings with a discerning array of specially curated content to fulfil the preferences of each of our customers and we promise to continue to delight our customers.”