Delhi and Mumbai are expected to be the next one to get it.

Bharti Airtel has launched 4G (LTE) services in Chandigarh, Mohali and Panchkula. The service will offer data download speeds up to 100 Mbps. Airtel had already launched its 4G services in Kolkata, Bangalore and Pune.

The service will be able to support streaming of High Definition (HD) videos, and other services that work on high speed networks. However unlike Pune, where the company has announced support for voice services, in rest of the circles including Chandigarh no such announcement has been made. 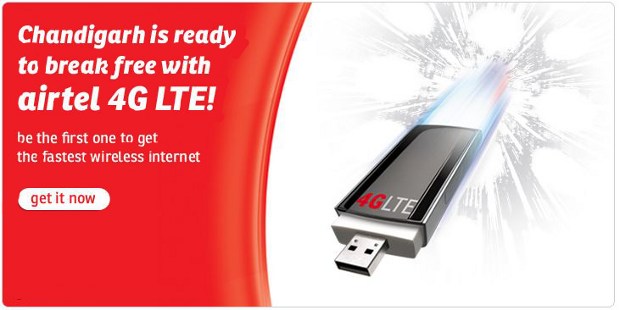 The plans are not very expensive when you compare these with 3G services, and since all the plans are unlimited you will not even get a bill shock. However, currently there are no tablets or smartphones in the market which are compatible to use the 4G services, so you can only make use of the 4G network with your laptops or as a home/office broadband network.

Airtel is currently the only player to offer 4G services in the country. However once players like Reliance Industries (RIL) launches their service we will see more competition and a steep drop in 4G data tariffs.

The company has said that it is currently working towards rolling out state-of-the-art networks in remaining license circles. And we know from our sources that Delhi and Mumbai circles are next in line for the launch.