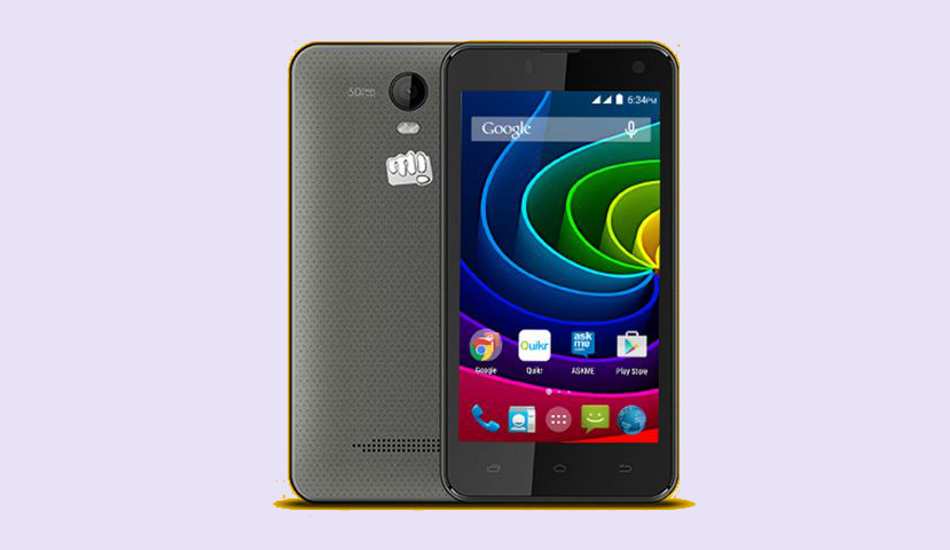 Mad about selfies? Don't worry these days good selfie smartphones are available even in a budget, just like these five.

Selfies are quite unique to smartphones. Almost every day we are bombarded with selfies from all quarters and social network websites like Facebook, Instagram are literally flooded with selfies. But unfortunately not all of those are good and the main culprit is poor front cameras of smartphones (ofcourse a small part is people’s bad technique in taking selfies).

But good selfie smartphones are not costly these days. Here we have listed five such smartphones with superb 13 megapixel front camera.

At about Rs 8,500, it is the cheapest phone currently to have a 13 megapixel selfie camera. The secondary camera has auto focus feature as well. Infact, it has a 13 megapixel rear camera as well. Apart from that the phone has a 1.7 GHz octa core processor, dual SIM, 4.7 inch HD display, 2 GB RAM, 16 GB internal memory and a 32 GB micro SD card slot.

It however is a 3G handset as well as the older Android KitKat operating system. Besides, it offers Bluetooth 4.0, micro USB port, WiFi,

It is slightly costlier and is slightly better than the Micromax Canvas Selfie. InFocus M680 comes with a 5.5-inch Full HD display and is powered by a MediaTek MT6753 octa-core processor clocked at 1.5GHz and 2GB RAM. The device has 16GB of internal storage that can be expanded up to maximum of 64GB via a micro SD card.

On the camera front, the M680 has a 13 megapixel front and rear camera. It runs on Android 5.1 Lollipop operating system and supports 4G connectivity. Apart from that it has regular connectivity options. InFocus M680 has a 2,600mAh battery unit and supports dual SIM, though one SIM slot is a hybrid one.

To read its review clickhere.

It is currently available in 2 GB and 3 GB RAM variants for Rs 13,799 and Rs 16,999 respectively. Apart from that all the features remain the same. The Zenfone Selfie features a PixelMaster 13 MP front camera with an f/2.2 aperture and 88-degree wide-angle lens. It also comes with an advanced 13 MP rear camera with a large f/2.0 aperture lens. Both the cameras feature five-prism Largan lenses, top-quality Toshiba sensors and dual LED Real Tone flash technology. It also allows capturing selfies through gestures. Besides, it has dual tone LED flash light in the front as well as beautification mode and HDR mode for selfies. The front camera also has panorama and low light modes.

This is quite a unique smartphone. It actually has a rotating camera module which comes with a 13 megapixel auto focus camera. So you can use this camera as rear as well as a front camera. It has Qualcomm Snapdragon 400 quad core processor and 2 GB RAM. For storage it has 16 GB of internal memory.

However, it has no expandable storage slot and it comes with Android Jelly Bean (though as per reports, Oppo has rolled out Android Lollipop version for the phone).

It is one of the newest phones to have 13 megpaixel rear and front camera. It is a dual SIM smartphone that is powered by a Qualcomm Snapdragon 615 chipset and run on Android Lollipop 5.1 operating system.

LFY Earth 2 has 13-megapixel front and rear camera with flash and supports features like Face Detection, Manual HDR, Panorama, Voice control Shutter, Gesture Capture, Smile Capture, Touch Up Mode. Both the SIM slots in the device support 4 G but at a time only one will be able to latch on to the 4G network.

It has a 3 GB RAM and 32 GB internal memory which can be further expanded to 64 using a micro SD card. Earth 2 has 5 inches Full HD display with 1080 x 1920 pixels resolution and 445 ppi. The device comes with a 2500 mAh battery which the company claims will offer up to 14 hours of talk time on 4G network.

You can also check out the recently launched InFocus M535+) which too has a 13 megapixel front camera.