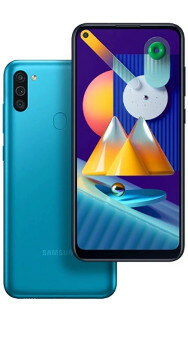 Samsung Galaxy M11 features a 6.4-inch HD+ Infinity-O LCD display with a screen resolution of 1560 x 720 pixels with a punch-hole at the top left corner of the display. On the back, the Galaxy M11 features a fingerprint sensor. It is powered by a 1.8GHz octa-core processor. As per reports, it is fueled by Snapdragon 450 SoC.