Charging technologies in a smartphone have evolved over time, thereby reducing charging times. Here are the top fastest charging phones available in the world right now. 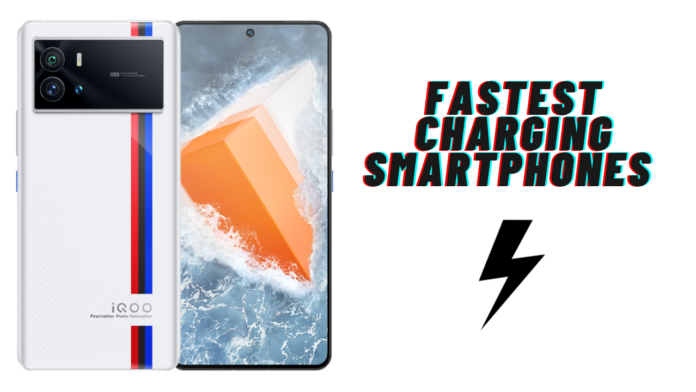 Smartphones nowadays have more than one USP and brands all around the globe seem to have focusing on how fast you can charge your smartphones and get going. There are new technologies that are being developed, such as the Surge P1 chip in Xiaomi 12 Pro that allows the smartphone to retain a single cell battery design and still charge at 120 watts of power which also results in better ageing of the battery. So here are the top fastest charging phones available for a consumer to purchase:

Xiaomi is one of the leading companies when it comes to innovation and the company has developed a chip called Surge P1 that is dedicated to the power management of the device. The Xiaomi 12 Pro, company’s first flagship device of 2022, is also the first smartphone to employ this chip which helps it to charge at 120W of power despite having a single cell 4600mAh battery design. This makes the Xiaomi 12 Pro one of the fastest charging phones available in the market.

For those unaware, manufacturers currently use a dual-cell battery design that allows them to achieve high charging speeds. However, according to Xiaomi, this design adversely affects the battery capacity and ultimately the battery life. The company has redesigned the charging architecture and through two self-developed charging chips, it optimized the charge pump structure.

Other specifications of the smartphone include a 6.73-inch AMOLED LTPO (Samsung E5) display with a QHD+ (3200 x 1440 pixels) resolution, 120Hz refresh rate, 480Hz touch sampling rate, and 100% DCI-P3 wide color gamut coverage. Along with that, it has Dolby Vision and HDR10+ support with 1500nits of peak brightness and Corning Gorilla Glass Victus protection.

The device is powered by the Snapdragon 8 Gen 1 SoC along with up to 12GB of LPDDR5 RAM and up to 256GB of UFS 3.1 storage. The graphics are handled by the Adreno 730 GPU. At the rear, you get a triple camera setup including a 50MP IMX707 main camera with OIS, 50MP ultrawide camera and a 50MP telephoto sensor. At the front, there’s a 32MP sensor for selfies.

Available in India as well, the Poco F3 GT is gaming-centric smartphone which means it will obviously consume a lot of battery. To juice it up quickly, Poco equipped the smartphone with 67W of fast charging to charge the 5065mAh battery cell from empty to full within a span of just 42 minutes which is impressive.

As for other specs, Poco F3 GT features a 6.67-inch AMOLED display FHD+ (2400 x 1080 pixels) display. Further, the display comes with a 120Hz refresh rate, a 480Hz touch sampling rate, 500-nits peak brightness, and Gorilla Glass 5 protection. Additionally, there is HDR 10+, and DC Dimming. It packs the MediaTek Dimensity 1200 SoC with up to 8GB of LPDDR4x RAM and up to 256GB of UFS 3.1 storage. The storage is expandable via microSD card.

For photos and videos, the phone comes with a triple rear camera setup. It has a 64-megapixel /1.65 aperture primary camera, 8MP ultra-wide camera with f/2.2 aperture, 119° FoV and a 2MP macro camera. For selfies and video calls, the device uses a 16-megapixel shooter.

We say series because both the phones under the iQOO 9 series come with a 4700mAh battery that have support for 120W fast charging. While they may not have a single cell design, they are one of the fastest charging phones available on the planet. iQOO claims that you can charge the smartphones to a 100% only in 19 minutes which is insanely fast.

The Pro model sports a 6.78-inch Samsung E5 OLED display which has a refresh rate of 120Hz, and a peak brightness of 1500 nits. It is an LTPO 2.0 curved panel which has a QHD+ resolution compared to FHD+ on iQOO 9. There’s an in-display fingerprint sensor for security. The device is powered by the Snapdragon 8 Gen 1 SoC and gets up to 12GB of LPDDR5 RAM and up to 512GB of UFS 3.1 storage.

As for optics, iQOO 9 Pro is equipped with a triple camera setup, featuring a 50-megapixel primary sensor with a Samsung GN5 1/1.57 lens which supports optical image stabilisation (OIS). Then there’s a 50-megapixel ultrawide-angle camera with a 150-degree field-of-view and a 16-megapixel camera for portrait images. There’s a 16-megapixel sensor on the front for selfies and video calls. They are currently available for purchase only in China while an India launch has been confirmed.

OnePlus unveiled the OnePlus 10 Pro just yesterday in China and the smartphone succeeds the OnePlus 9 Pro from last year that charged at 65W. The 10 Pro now charges at 80W that can charge the 5000mAh battery from 0 to 100% in just 32 minutes which is again impressively fast considering a battery that has such high capacity. Moreover, the device also supports 50 watts fast wireless charging which is also great.

Additionally, the OnePlus 10 Pro has a second-gen Hasselblad triple camera setup at the rear including a 48MP Sony IMX789 primary sensor, 50MP Samsung ISOCELL JN1 150-degree ultra-wide sensor, and an 8MP 3.3x telephoto shooter with OIS. On the front, there’s a 32MP Sony IMX615 sensor for selfies and video calls. The Global and India launch of the smartphone is expected by February end or early March.

Launched last week in India, the 11i HyperCharge is the fastest charging phone available in the country and is the first one to come with 120W charging. Xiaomi claims that the 120W charger can charge the device from 0 to 100 in just 15 minutes that makes it insanely quick. However, this is not a single cell battery design, but a dual-cell one, that will result in much faster degradation of battery over time, so you might want to keep that in mind before making a decision to purchase.

We have also explained if the smartphone is worth purchasing just for 120W fast charging or not because the rest of the smartphone doesn’t seem as quick as the fast charging rate. It sports a 6.67-inch AMOLED display with 1,080 x 2,400 pixels resolution and a 120Hz refresh rate. Further, there will be a 360Hz touch sampling rate, 1200 nits of brightness, Gorilla Glass 5 protection and a punch hole at the front. It is powered by an octa-core MediaTek Dimensity 920 SoC. The chipset is paired with up to 8GB of LPDDR4x RAM and up to 128GB of UFS 2.2 storage.

At the rear, Xiaomi 11i HyperCharge comes with a triple-camera setup. This setup includes a 108-megapixel primary sensor. In addition, there is an 8-megapixel ultrawide cam with 120-degree FoV and a 2-megapixel macro camera. The front-facing camera has a 16-megapixel sensor.