Nubia Z18 is said to be powered by the latest Qualcomm Snapdragon 845 chipset along with Adreno 630 GPU.

Nubia recently launched the Z18 Mini smartphone in China and now it is working on its elder sibling, the Z18 flagship phone. Nubia CEO Ni Fei has released a new poster on the Chinese social networking website Weibo to reveal the Nubia smartphone will be featuring Full Screen 3.0 design. As per reports, the smartphone is none other than the Nubia Z18.

The purported teaser poster reveals that the Nubia Z18 might feature the 3.0 Full-Screen design. The teaser shows that the smartphone features the selfie camera on top of the screen in the middle. He added Z18 will come with higher screen-to-body ratio than the Z17S which was launched in October last year. The Nubia Z17S featured a screen-to-body ratio of 90.36 percent. 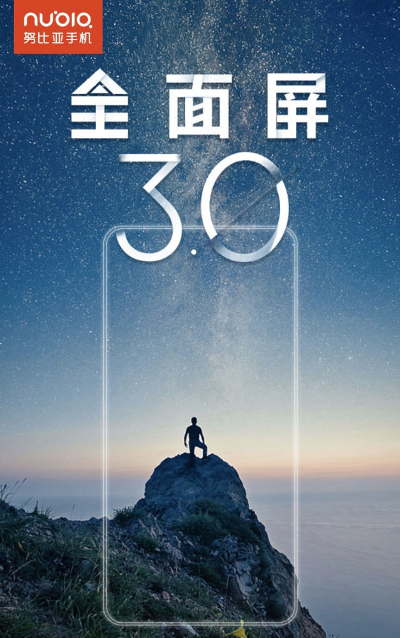 The Nubia Z18 smartphone with model number NX606J was spotted on TENAA recently. The listing reveals that the smartphone will feature a 5.99-inch Full HD+ display with a screen resolution of 2160 x 1080 pixels.

Nubia Red Magic 5S to be announced on July 28