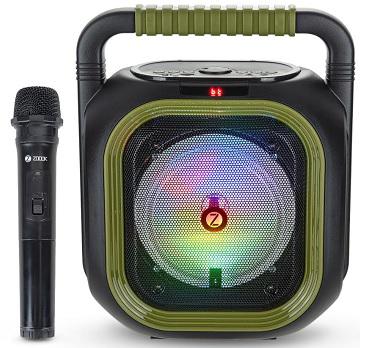 Equipped with the latest Bluetooth v5.0 technology, the portable speaker lets users stream their favourite playlist without any hassles. The 30 watts high-power output party speaker comes with a wireless microphone to get the party started instantly. There are dynamic LED lighting on the front and flashing DJ lights.

ZOOOK Rocker Thunder Bolt speaker comes with 6” woofer for hosting a karaoke party. Besides a wireless microphone, the speaker also has an in-built mechanism to let users add echo to their sound. The microphone remains connected up to a range of 10 metres. The speaker is light weight and it weighs less than 1.5 kg and hence can be moved anywhere without trouble.

The speaker is powered by a 3.7V 1200mAh battery, which allows non-stop music playback for up to five hours, following a charge time between three to five hours. With ZOOOK Rocker Thunder Bolt, you get X-Bass, which ensures a thumping deep bass sound. Apart from Bluetooth, the party speaker further offers multiple connectivity options such as Aux, USB flash and Mic-In.

The top console of the speaker houses different controls and buttons for functions such as playing previous song, next song, play, pause, volume control, Mic control, equalizer, power on/off. There is also the option to toggle between music source such as USB or Aux-in.