Going to restaurant in India will be a new experience for consumers after the lockdown is lifted.

Most of you will be eager to head out and visiting your favourite restaurants you’ve missed going to during the lockdown. But as things stand, the restaurant dining experience, after the lockdown is lifted, will unlikely be the way we know. Dining and food delivery brands like Zomato, Dineout and Swiggy have already started doing contactless delivery, which ensures the consumers are not coming in contact with their delivery staff.

And pretty soon, you’ll notice that restaurants are also following a similar model, which is called contactless dining. Which brings us to a very important change in your dining-out style, and making smartphones a very critical ingredient to that experience. Zomato and Dineout are working out the new restaurant models with their respective partners, and they’ll be hoping that businesses adjust to the new blueprint, which is likely to reduce the space available to the diners. To make this viable, Zomato even confirmed the restaurants moving to its new model will not be charged for the next six months.

But where does mobile become integral to all this you ask? The contactless model, in general, is focused on minimising your contact with the staff at the restaurant. Which means, everything from making a reservation, giving an order to making the bill payment will be done through a mobile device from here on. 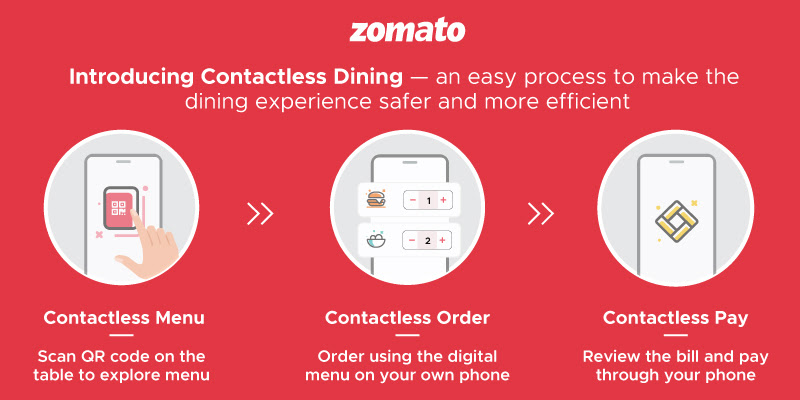 The only part where the staff will interact with the user will be while delivering the food to their table, which will also have them wearing all the protective gear, following the safety standards that will be prescribed to the restaurants. QR codes through food ordering apps, and payment through apps like Paytm and Google Pay will become a common sight. These changes are drastic, but nobody’s going to argue that in such an unprecedented situation, measures like these are imperative.

And consumers look fairly prepared to handle and go about with these changes. According to a recent survey by Dineout, 96 percent people questioned from over 20 cities said they will be making reservations in advance. But more importantly, 81 percent of them would scan a QR code on their phone to place an order, instead of going through physical menus and 60 percent of these will happily prefer using digital apps for payments rather than swiping debit/credit cards.

These figures might sound encouraging but we’re also talking about a minuscule part of the population, wherein you have over 150 million users with payment apps on mobile, and probably fewer than that with food delivery apps. But let’s not forget, majority of the population uses mobile devices in the sub 15K segment, which may not be conducive for heavy digital activities and these trends don’t speak for all the regions in the country.

But one thing is certain, the contactless ecosystem is sure to make sweeping changes in the F&B industry, with cuts in manpower, and preference for digitisation becoming a priority.