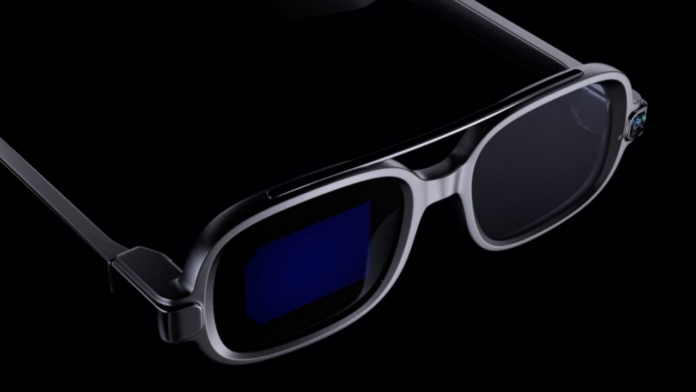 Weighing a mere 51g, Xiaomi Smart Glasses can display messages and notifications, make calls, navigate, capture photos, and translate text right before your eyes. The functionality a quite similar to Ray-ban Stories, which is a product by Facebook and Ray-Ban.

Xiaomi Smart Glasses adopts MicroLED imaging technology. This lowers the design space needed in structural design and the overall weight of the device. Xiaomi’s explains that MicroLEDs pixels are individually lit, similar to how OLED panels work. In addition, its emissive property allows for brighter displays and deeper blacks. But MicroLEDs have a higher pixel density and longer lifespan while having a simpler structure. This allows for a more compact display, as well as easier screen integration.

These Smart Glasses have a display chip measuring just 2.4mm x 2.02mm. Under a microscope, the display is roughly the size of a grain of rice, with individual pixels sized at 4μm. Xiaomi has opted for a monochrome display solution, which can reach a peak brightness of 2 million nits.

The Smart Glasses selects and pushes the most important messages as notifications. These include smart home alarms, urgent information from office apps, and messages from important contacts, etc., to avoid excessively disturbing users. The company says that it chose XiaoAi AI Assistant as the primary interaction method.

One can make or receive calls as well using glasses. Using the built-in dual beamforming microphone and speaker, both parties can hear each other clearly while on a call. In addition, Xiaomi Smart Glasses can also present roads and maps in front of you in real-time so that you can keep your eyes on the road safely and conveniently.

The 5MP camera on the front of the glasses can also take photos and translate text into photos. The Ray-Ban Stories also uses 5MP cameras on the front. Xiaomi Smart Glasses is capable of transcribing audio into text with translations in real-time. The indicator light next to the camera will illuminate when the camera is in use to indicate that photos are being taken. This works similar to Facebook’s implementation.