Xiaomi schedules Redmi Note 7S launch in India on May 20

Xiaomi is planning to launch a new smartphone in India under its Redmi Note moniker. The Chinese manufacturer has scheduled a launch event on May 20 and has revealed the name of the device as the Redmi Note 7S.

The news comes from Redmi India’s official Twitter handle which stated that the Redmi Note 7S is coming on May 20, just under three months after the company unveiled the original Redmi Note 7 and Note 7 Pro in India. The latest development follows Redmi India’s tweet from earlier this week who disclosed that new Redmi phone with an “S” is coming to India with a new 48MP camera unit. 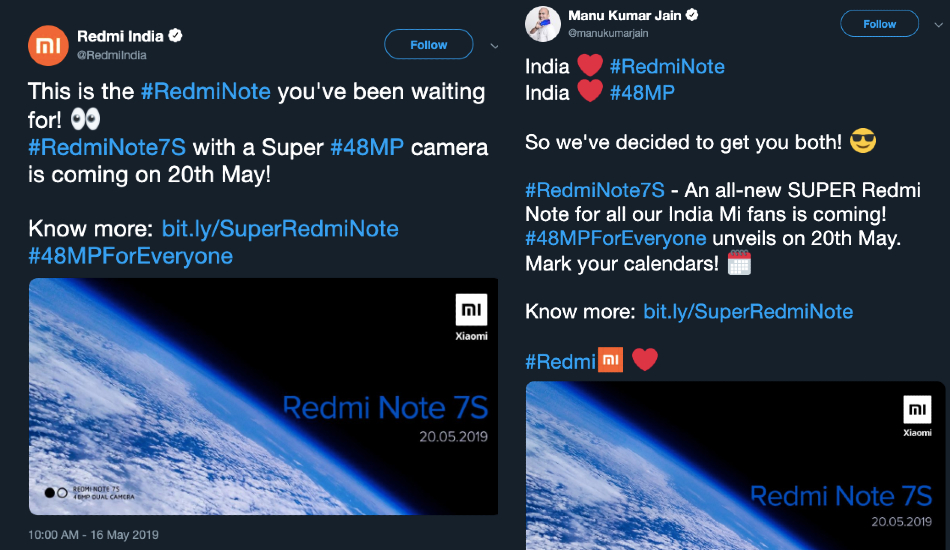 The Redmi Note 7S in question appears to be the Redmi Note 7 that Xiaomi sells in China with a 48 MP primary sensor and a 5 MP secondary sensor on the rear side. This is the same phone that the company’s Europe team sent to space in a hydrogen balloon earlier this month. We believe so because the image posted as being clicked on the Redmi Note 7S resembles that of the pictures clicked during Xiaomi’s smartphone in space experiment.

This means we can expect no major difference between the Redmi Note 7 and Redmi Note 7S apart from the presence of a 48MP camera. If the phone turns out to be the same, it’ll feature a 6.3-inch Full-HD+ display with a dot notch and a resolution of 2340 x 1080 pixels. The Note 7S could be powered by a Snapdragon 660 processor with Adreno 512 GPU, up to 4GB of RAM and 64GB internal storage.

Besides that, the Redmi Note 7S could be running Android 9 Pie with MIUI 10. It’s expected to be fuelled by a 4,000mAh battery with support for Quick Charge 4.0.