Xiaomi rolls out August 2018 security patch to Mi A1

Weighing at under 475MB, the latest update changes the build number of the Mi A1 to ‘OPM1.171019.026.V9.6.5.0.ODHMIFE’ and brings with it the August 5, 2018 batch of Android security updates from Google that resolves bugs and performance issues and improves security.

Xiaomi unveiled the Mi A2 in India earlier this month as its second Android One phone. But that doesn’t mean its predecessor – Mi A1 has been long forgotten as the Chinese manufacturer has started seeding the latest monthly security updates from Google just months after the device was updated to run on Android 8.1 Oreo.

The latest update changes the build number of the Mi A1 to ‘OPM1.171019.026.V9.6.5.0.ODHMIFE’ and brings with it the August 5, 2018 batch of Android security updates from Google that resolves bugs and performance issues and improves security. The update weighs in at under 475MB with the changeling reading improved device stability and performance optimisation. That’s larger than the last update to the phone which was rollout after the Android Oreo update for Mi A1 was resumed. 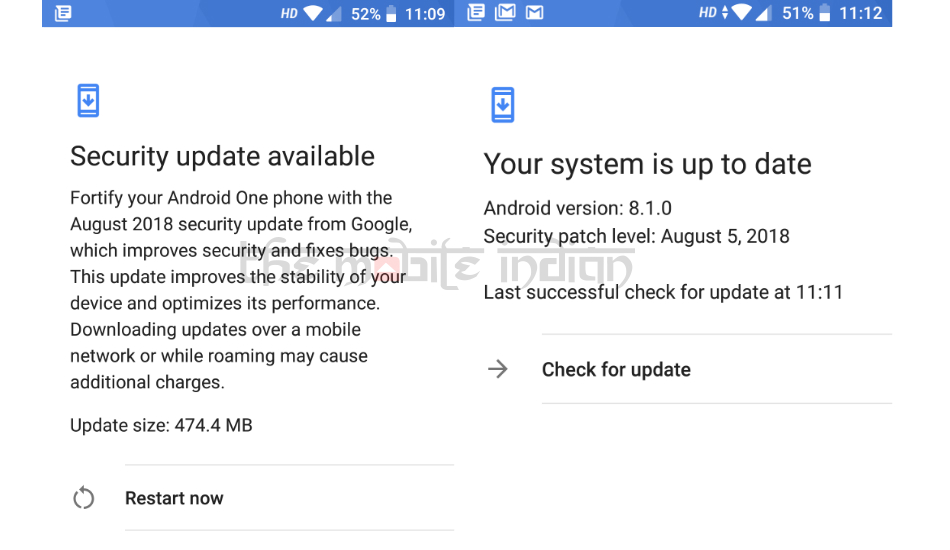 The latest update will be prompted to be downloaded as an OTA package and in case you haven’t received such a notification, we suggest you head over to Settings> About Phone and manually check for updates on your Mi A1.

To recall, Xiaomi introduced its first Android One smartphone with the release of the Mi A1 last year in partnership with Google to introduce options that let customers opt for a stock version of the latest Android OS. The device sports a metallic unibody and features a 5.5-inch Full HD display with a screen resolution of 1920 x 1080 pixels along with Corning Gorilla Glass protection. The device is just 7mm thin and weighs 168 grams. Under the hood, the device is powered by an octa-core Qualcomm Snapdragon 625 processor along with a 4GB of RAM and 64GB of internal storage.