Earlier the company rolled out the 8.1 update but pulled back after users started complained about the SMS bug that erases the entire history of SMS on a user’s smartphone.

Xiaomi has finally resumed the Android Oreo 8.1 update for its Mi A1 Android One smartphone. Earlier the company rolled out the 8.1 update but pulled back after users started complained about the SMS bug that erases the entire history of SMS on a user’s smartphone.

The update comes with build number OPM1.171019.026.V9.6.4.0.ODHMIFE . The update also brings the security patch level to July with some major bug fixes. The software comes over-the-air as a 467MB download for users who already installed the buggy update before. For those users who will update the Oreo 8.1 Oreo for the first time will get a huge software update weighing over 1GB. 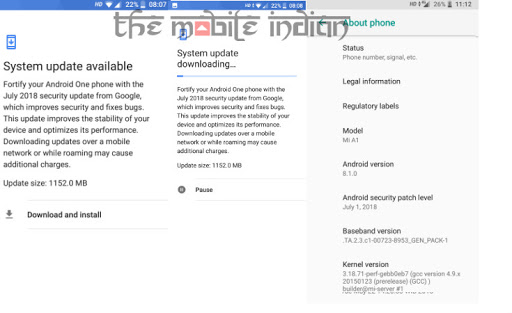 The Android 8.1 Oreo update is currently available as an OTA but can be manually downloaded to the phone. Users can go to Settings> About Phone, to check for the latest update manually. The update includes bug fixes and optimizes the performance of the smartphone.

Xiaomi introduced its first Android One smartphone with the release of the Mi A1 last year in partnership with Google to introduce options that let customers opt for a stock version of the latest Android OS. The device sports a metallic unibody and features a 5.5-inch Full HD display with a screen resolution of 1920 x 1080 pixels along with Corning Gorilla Glass protection. The device is just 7mm thin and weighs 168 grams. Under the hood, the device is powered by an octa-core Qualcomm Snapdragon 625 processor along with a 4GB of RAM and 64GB of internal storage. It comes with dual graphite sheet, which decreases the temperature by 2-degree. On the audio front, it features with 10V smart PA for high-quality audio.