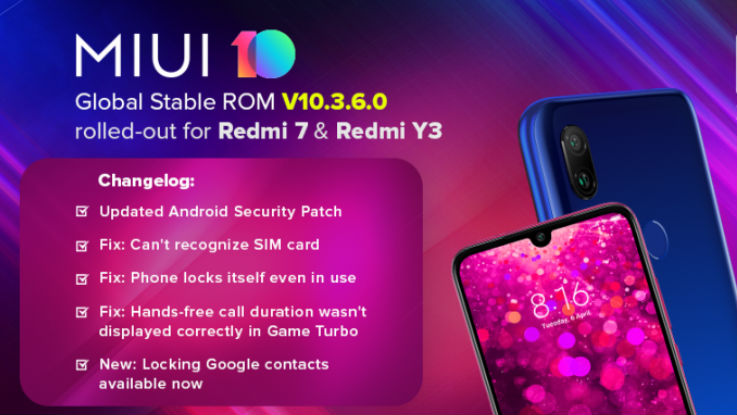 The update comes with version number MIUI v10.3.6.0 for both the devices.

Xiaomi has started rolling out a new update to its Redmi Y3 and Redmi 7 smartphones in India. The new update brings an updated security patch along with some bug fixes and improvements.

The update comes with version number MIUI v10.3.6.0 for both the devices. It brings a new Android security patch, though the company has not revealed which month of security patch both the phones are getting. The update also brings the option to lock Google contacts on Redmi 7 and Redmi Y3.

Furthermore, it brings the fix for phone locks itself even when in use. It also fixes the hands-free call duration that wasn’t displayed correctly in the Game Turbo mode. Lastly, it also fixes the issue through which it was not able to recognise the SIM card. Here is the full changelog:

Fixed: Phone lock itself while in use

Recollecting some key specifications, the Redmi Y3 and Redmi 7 are equipped with a 6.26-inch HD+ display with 1520 x 720 pixels, 19:9 aspect ratio, Corning Gorilla Glass 5 protection and 450nits brightness. Both of them are powered by a Qualcomm Snapdragon 632 processor along with Adreno 506 GPU.

The Redmi 7 has dual rear camera setup with a combination of 12-megapixel primary sensor with LED Flash, 1.12um pixel size, f/2.2 aperture, a secondary sensor of 2-megapixel. For the front, the smartphone has an 8-megapixel camera for selfies and video calling with features like AI beauty and AI face unlock. The Redmi Y3 is equipped with a 32-megapixel selfie shooter.