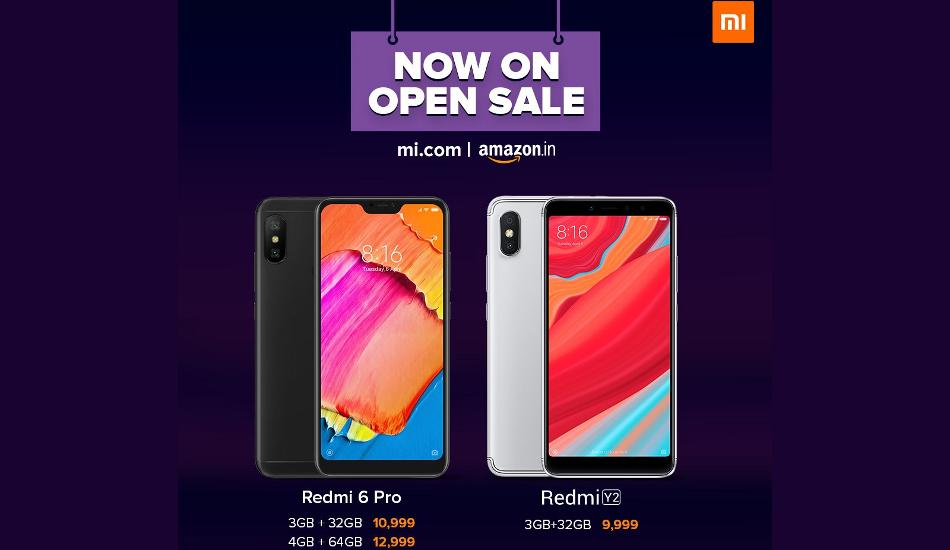 Xiaomi’s Global Vice President Manu Kumar Jain has announced the open sale availability on his official twitter handle. The tweet says that the phones will be available in open sale on the occasion of the festive season in India. All three devices can also be purchased Mi.com as well as select Mi Home and Mi preferred partner stores.

Another reason to be happy this festive season: many #Xiaomi phones will now be available on open sale! #RedmiY2 (selfie king) & #Redmi6Pro on @amazonIN. #POCOF1 (#MasterOfSpeed) on @Flipkart.

You can also get them from Mi. com, Mi Home & Mi Preferred Partner stores. pic.twitter.com/kSxBoPVeAx

TheXiaomi Poco F1 It features a 6.18-inch Full HD+ (2246 x 1080 pixel resolution) display with a notch at the top and 19:9 aspect ratio. It is powered by a Qualcomm Snapdragon 845 2.8GHz octa-core processor with Adreno 630 GPU. The phone has a 4,000mAh battery and it runs on Android 8.1 Oreo out-of-the-box. There is dual rear cameras of 12-megapixel primary Sony IMX363 sensor and a 5-megapixel secondary Samsung sensor. For the front, it has a 20-megapixel camera with IR face unlock feature.

The Xiaomi Redmi 6 Pro has a 5.84-inch full-HD+ (1080×2280 pixels) notched display with a 19:9 aspect ratio. The smartphone is powered by a Qualcomm Snapdragon 625 SoC with an Adreno 506 GPU. For storage, it has 3/4GB of RAM and 32/64GB of internal storage with expandable via microSD card (up to 256GB) It has a dual rear cameras with a combination of 12-megapixel primary sensor and a 5-megapixel secondary sensor and a 5-megapixel front camera sensor for selfies. The smartphone 4,000mAh battery and runs Android 8.1 Oreo out-of-the-box.

The Xiaomi Redmi Y2 has a 5.99-inch HD+ display with 1440 x 720 pixels resolution and an aspect ratio of 18:9. Powered with a 2GHz Snapdragon 625 octa-core processor with Adreno 506 GPU, the smartphone comes with 3GB/4GB of RAM and 32GB/64GB of internal storage. It runs on Android 8.1 Oreo operating system and it has 3,080 mAh battery. On the camera front, the Redmi Y2 has a 12-megapixel primary camera with PDAF, LED Flash and 5-megapixel secondary camera for AI portrait shots. For the front, the device has a 16-megapixel front-facing camera for selfies.