Poco F2 will run on upcoming Android Q, which will be based on the company’s custom user interface on top of it.

Xiaomi’s sub-brand, Poco, seems to be working on its second smartphone. Dubbed as Xiaomi Poco F2, the phone has now been again spotted on Geekbench revealing some key specifications.

The listing reveals that the Poco F2 will run on upcoming Android Q, which will be based on the company’s custom user interface on top of it. The phone has scored 1776 points in the single-core test and it received 6097 points in the multi-core test. 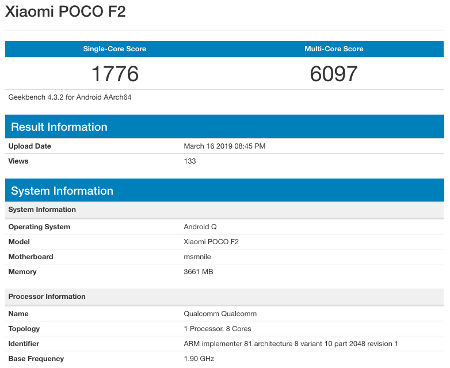 Moving on, the listing reveals that the Poco F2 will be powered by the same Qualcomm Snapdragon 855 processor. It is to be noted that Qualcomm Snapdragon 845 was present in its first-generation Poco F1 smartphone. The listing further reveals that the phone is powered by a 4GB of RAM, however, one could also expect different memory and storage options for the upcoming smartphone. Xiaomi Poco F1 is available in 6 GB and 8 GB RAM options.

Earlier, Poco F2 was spotted on GeekBench website in December last year. The listing then revealed that the smartphone will be powered by Qualcomm Snapdragon 845 processor and 6GB of RAM. For the software, the listing showed Android 9.0 Pie out-of-the-box.

For the software, the Poco F1 Lite will run Android Pie out of the box. The phone has scored 1,341 points in the single-core and 4,830 points in the multi-core test.