The listing reveals that the Poco F2 will be powered by the same Qualcomm Snapdragon 845 processor, which is present in its first-generation Poco F1 smartphone.

Xiaomi’s sub-brand, Poco, seems to be working on its second smartphone. Dubbed as Xiaomi Poco F2, the phone has been spotted on Geekbench revealing some key specifications.

The listing reveals that the Poco F2 will run on Android 9.0 Pie, which will be based on the company’s custom user interface on top of it. The phone has scored 2321 points in single-core test and it received 7564 points in multi-core test. 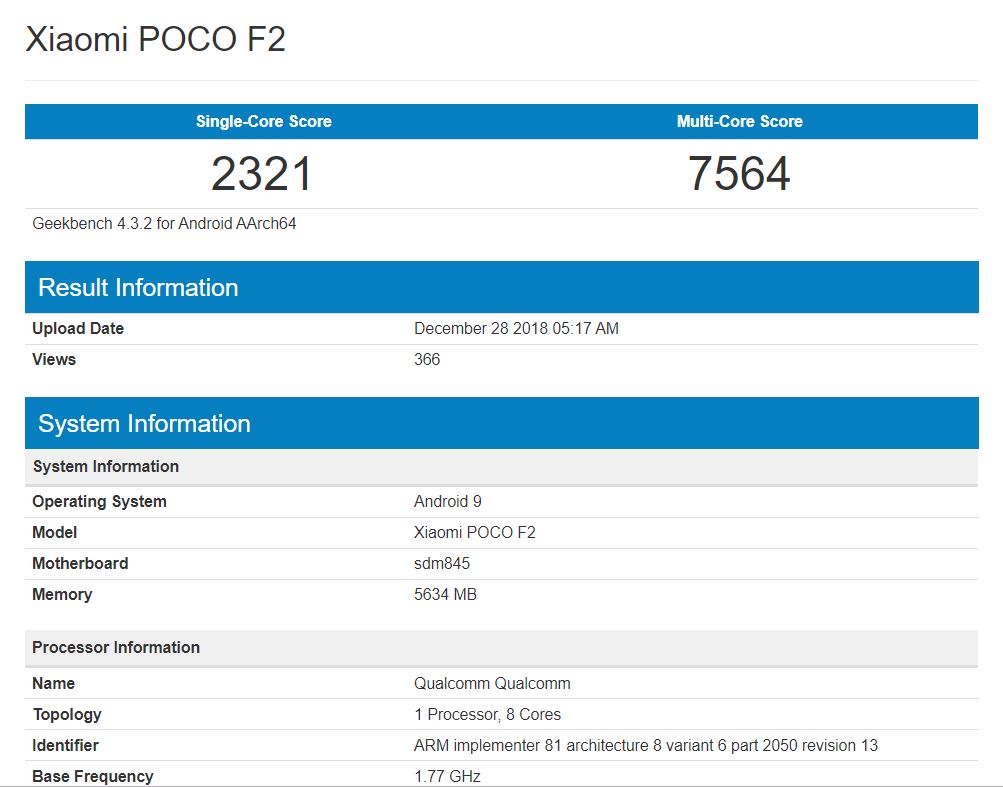 That said, it would be interesting to see what all the company will add to its latest smartphone. As for the expectations are concerned, one could expect to support latest waterdrop notch trend coupled refined design language and better camera performance as compared to its predecessor. We suggest you to stay tuned with for further details on the upcoming smartphone from Xiaomi’s sub-brand Poco.

To recall, Xiaomi’s Poco recently introduced a new variant for its Poco F1 smartphone. Dubbed as Poco F1 Armored Edition, the model comes with a price tag of Rs 23,999 and it will be exclusively available on Flipkart and company’s official store.

The new variant of the Poco F1 comes with a Kevlar aramid fibre at the back panel that gives a premium. This is the same material that has been used for its top-end variant, Kevlar Armored Edition. The latest model comes loaded with 6GB of RAM and 128GB of internal storage and it is priced just Rs 1,000 more than the standard variant. Rest of the specifications remains the same.

Poco F1 Armored Edition with 6GB of RAM launched in India for Rs 23,999