Xiaomi Product Management Director, Donovan Sung took to Twitter to tease the successors to the Mi A2 and Mi A2 Lite Android One phones that were announced last year.

Xiaomi has officially teased the Mi A3 series smartphones which are set to debut in the coming weeks. The next line of Android One smartphones from Xiaomi is also expected to come in two models – the Mi A3 and Mi A3 Lite.

The news comes from Xiaomi Product Management Director, Donovan Sung who took to Twitter to announce that it had been a year since the Mi A2 and Mi A2 Lite Android One phones were announced. Sung also asked users what do they look forward to in the next line of smartphones in the Mi A series. 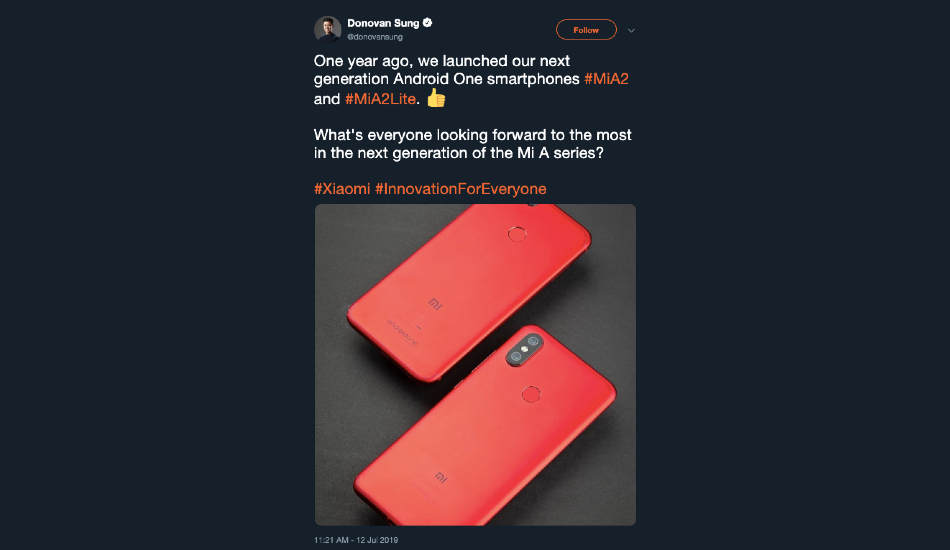 While not much has been known about Xiaomi’s upcoming Android One phones, the Mi A3 and Mi A3 Lite were previously reported to have beencodenamed “bamboo_sprout” and “cosmos_sprout”respectively. The devices are expected to be the Android One versions of the already launchedMi CC9 and CC9e which were announced earlier this monthin China.

The Mi A3 is expected to be powered by a Snapdragon 730 processor with two Cortex-A76 and six Cortex-A55 cores and an Adreno 618 GPU. The Snapdragon 730 chipset will be built on a Samsung 8nm LPP process offering better energy efficiency than the Snapdragon 660 on the Mi A2.

The Mi A3 Lite is expected to be powered by an 11nm-based Snapdragon 675 with Kryo 460 cores and six Cortex-A55 cores. It will feature an Adreno 612 graphics processor.

Other features expected to be packed inside the Mi A3 lineup include triple cameras with a 48MP sensor, 1080p displays and a near-to-stock version of Android 9 Pie with promised software updates for the next two years.