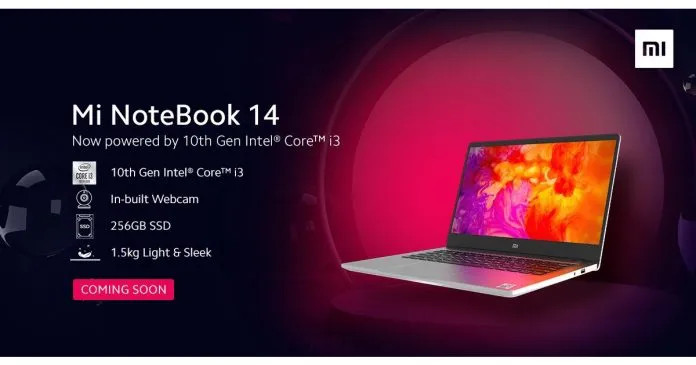 Mi NoteBook 14 model with an Intel 10th generation i3 processor will come with 256GB internal storage.

Xiaomi India CEO Manu Kumar Jain today announced that new Mi NoteBook 14 model with an Intel 10th generation i3 processor will be launched in the country soon. However, Xiaomi has not revealed the exact launch date of the upcoming laptop.

As per the image shared Jain shows that the new model will come with 256GB internal storage. It will also feature a built-in webcam. The Mi Notebook 14 Core i3 edition is a light and sleek device that weighs only 1.5kg. Xiaomi Mi NoteBook 14 with 10th Gen Core i3 processor is likely to feature the same specifications as other models.

It is expected to feature a 14-inch full HD display with a resolution of 1920×1080 pixels. It could come bundled with an Nvidia GPU.

To recall, Xiaomi Mi NoteBook 14 and Mi NoteBook 14 Horizion Edition feature 14-inch Full HD display with a screen resolution of 1920 x 1080 pixels along with 178-degree viewing angle, 91 per cent screen-to-body ratio. Both the laptops run on Windows 10 Home Edition and are loaded with a 65W charger.