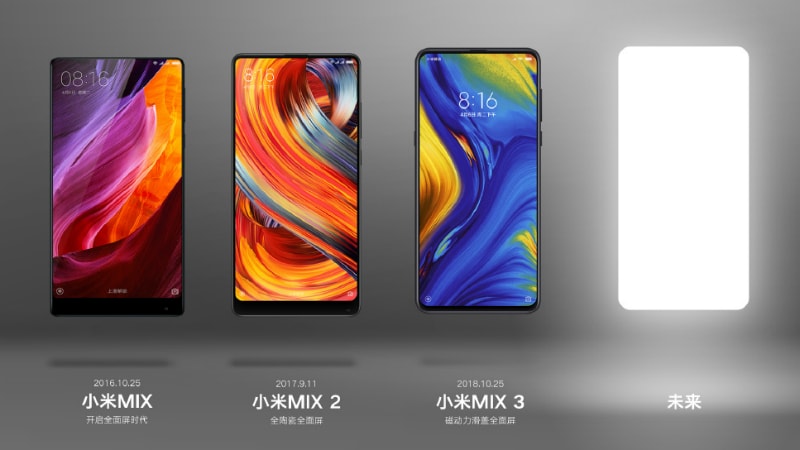 The upcoming Mi Mix series phone will come will all-screen display with no cutouts anywhere.

Xiaomi launched Mi Mix 3 smartphone in October last year. Later its 5G edition was also announced in Europe last month. The 5G variant is powered by the Qualcomm’s Snapdragon 855 processor paired with an X50 5G modem. Now, the Chinese company has teased a new Mi Mix model that could emerge as the new Mi Mix 4.

Xiaomi hasteased a new Mi Mix-series smartphone in Chinese microblogging website, Weibo post. The post shows Mi Mix, Mi Mix 2 and Mi Mix 3 listed. Next to the Mi Mix 3 is a blank space with an outline of a phone. This could possibly hint at the upcoming Mi Mix 4. However, Xiaomi is yet to officially announce the existence of the Mi Mix 4.

Sadly, the Weibo post doesn’t reveal any specific details about the Mi Mix 4 but the outline suggests that the upcoming Mi Mix series phone will come will all-screen display with no cutouts anywhere.

The Mi Mix, Mi Mix 2, and Mi Mix 2S had a selfie camera at the bottom side of their display panels. However, Xiaomi launched the Mi Mix 3 with a slider design.

As compared to the Mi Mix 3, the Mi Mix 4 is likely to offer a higher screen-to-body-ratio. As of now, no specs of the phone are known but some rumours suggest that the Mi Mix 4 may include a triple camera set up on the back panel that would have a periscope lens.

The Mi Mix phones are usually announced in the early fourth quarter of the year. Now since the company has started teasing for the upcoming Mi Mix phone, it is likely that the Mi Mix 4 may be officially announced early this year.