Xiaomi Mi Mix 4 will come with a new “waterfall screen” and a 90Hz display.

Xiaomi Mi 9 Pro and Mi Mix Alpha smartphones were recently launched in China. The company was earlier expected to launch the Mi MIX 4 but it launched MIX Alpha concept phone instead. Now an image of purported Mi Mix 4 has leaked online. As per reports, Mi Mix 4 will be launching on October 24.

The real-life image shared by Slashleaks shows that the phone will feature thick bezels around the display. There is no notch or punch-hole design in the front for the selfie camera. It is likely that the phone will come with a pop-up camera mechanism. 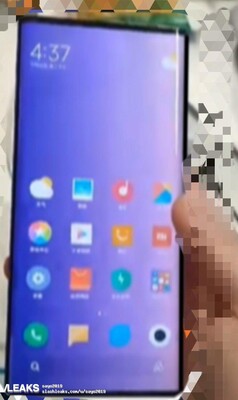 The front of thealleged Mi Mix 4 seems similar to recently launched Vivo Nex 3 which came with a high screen-to-body ratio display with extremely curved edges aka “waterfall display”. As per an earlier leak, Xiaomi Mi Mix 4 will come with a new “waterfall screen” and a 90Hz display. It is said to feature a curved screen that will carry support for 2K resolution.

Xiaomi Mi Mix 4 will reportedly feature 108MP sensor manufactured by Samsung. In addition to the 108-megapixel camera, the phone will likely sport a 16-megapixel ultra-wide lens and 12-megapixel periscope camera, probably capable of 5x optical zoom. Also, on the front side, there will be a pop-up mechanism for the selfie camera sensor. The phone is rumoured to come with 40W fast charging.

The phone will be powered by Snapdragon 855+ processor coupled with up to 12GB RAM and 1TB storage. It is said to carry support for UFS 3.0 storage. It will feature reverse wireless charging and will run MIUI 11 based on Android 10.