Xioami is expected to launch Xiaomi Mi Mix 2 on September 12 in China. Now as per a new rumour, Xiaomi Mi Mix 2 will be featuring 3D facial recognition for unlocking the smartphone.

A screenshot has been leaked on Chinese microblogging website, Weibo by a user. The secreenshot shows the 3D Face Recognition showing the outline of a head, prompting the user to look at the phone to unlock it. As per the leakster, this feature is said to be a part of the new MIUI 9 and will arrive exclusively for the Mi MIX 2 model at first. It is also to be noted that Apple is also working on 3D facial recognition technology for its upcoming iPhones. 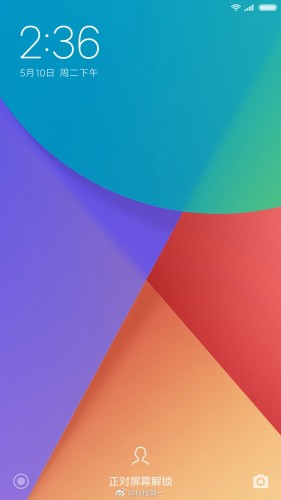 Sadly the leaked image does not reveal much about the new feature. It is expected that there might be a similar feature that Samsung implemented with the Galaxy Note7 which later was transferred to the Galaxy S8. Sony also has a similar feature which runs even on mid-range devices like the Xperia XA1 Ultra and Xperia L1.

Talking about the design part, the smartphone will come loaded with the ceramic back panel but will have a higher screen-to-body ratio of 95 percent, up from 91 percent in Mi Mix. Similar to its predecessor, the Mi Mix 2 will boast acoustic earphone technology, which basically eliminates the need for an earpiece.