Xiaomi Mi A1, company’s first Android One smartphone, to launch tomorrow in India

It is now confirmed that the company will be launching its first Android One smartphone, dubbed as Xiaomi Mi A1, tomorrow in India.

Xiaomi has been successful in creating the hype around its next smartphone, which is all set to launch tomorrow. However, it is now confirmed that the company will be launching its first Android One smartphone, dubbed as Xiaomi Mi A1, tomorrow in India.

To recall, both Xiaomi and Google were reported to be working on a new Android One smartphone that will come with a good combination of some key interesting hardware from Xiaomi and the latest software from Google. 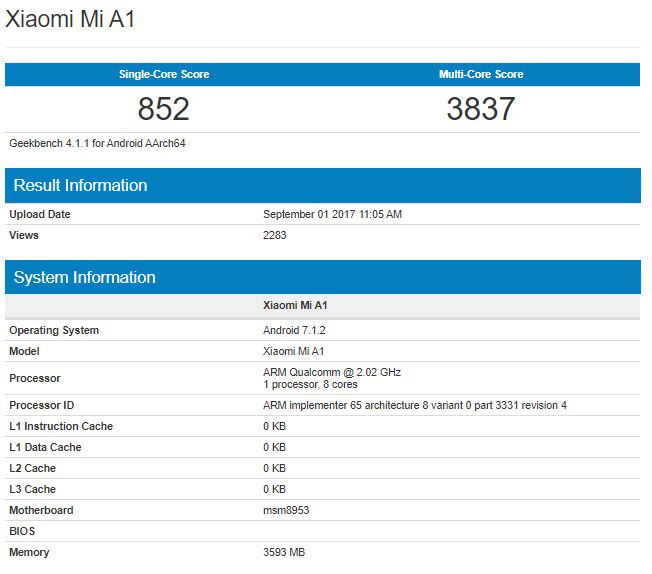 Interestingly, the device was spotted on Geekbench, which reveals some key specifications. According to the listing, the smartphone scored 853 points in single-core test and 3937 points in the multi-core test. The listing further reveals that it will run on Android 7.1.2 Nougat and it will be powered by an octa-core Qualcomm Snapdragon 625 processor, which is clocked at 2.02GHz. Further, the listing reveals 4GB of RAM as well.

However, there is no information about the camera and other specifications about the device, but the device was recently spotted on company’s online website, which reveals the missing specs. To start with, it will surely come with a dual-camera setup at the rear panel, which the brand has been teasing for a while on Twitter. The brand has already confirmed that the smartphone will be a Flipkart exclusive.

The device will sport dual-camera setup with both featuring 12-megapixel sensors. For the front, there will be an 8-megapixel shooter for selfies and video calling. The listing further reveals that the upcoming handset will be juiced up by a 3080 mAh battery. It will be backed by a 32GB of internal storage and it will feature a 5.5-inch Full HD display. The smartphone will come stock Android experience and will also feature Google security features, applications and users will also get free unlimited high-quality storage with Google Photos.

Note: Lead image is for representationalpurpose only