Xiaomi has already confirmed that the new Redmi K20 and Redmi K20 Pro will be launched in India in July this year.

Xiaomi Mi 9T has been confirmed to launch on June 12. As per rumours, the Mi 9T will be rebranded version of the Redmi K20 for markets outside China. Now Mi 9T has surfaced on Geekbench.

As per the GeekBench listing, the Xiaomi Mi 9T will be powered by 1.80 octa core processor. Instead of the name of the processor, “davinci” in written in the listing. In addition to this, the Geekbench listing also confirms that the smartphone will feature 6GB of RAM.

As for the software, the Xiaomi Mi 9T will run Android Pie out of the box. In the GeekBench listing, the phone has scored 2540 points in the single-core and 6911 points in the multi-core test. 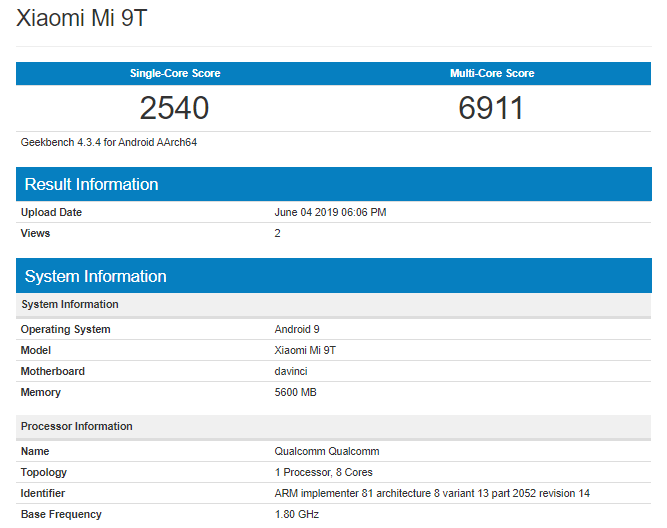 Redmi K20 and Redmi K20 Pro smartphones are respectively codenamed as Da Vinci and Raphael. So the listing has confirmed that the phone will be rebranded version of the Redmi K20. Hence, the Mi 9T may have identical specs as the Redmi K20.

Xiaomi has already confirmed that the new Redmi K20 and Redmi K20 Pro will be launched in India in July this year.

The Xiaomi Mi 9T features a 6.39-inch AMOLED display with notch-less design. The phone is powered by Snapdragon 730 chipset coupled with up to 8GB of RAM and upto 256 GB of internal storage. It does not feature a microSD card slot.

The phone will run MIUI 10 based Android 9 Pie and it is backed up with a 4,000mAh battery that is coupled with 18W rapid charging. For the camera, it features 48-megapixel + 8-megapixel + 13-megapixel triple rear camera setup and a 20-megapixel pop-up selfie camera.