Xiaomi is all set to launch its first smartphone with a 48-megapixel sensor on January 10. Now ahead of that, a mysterious Xiaomi smartphone has been spotted on a popular benchmarking website.

The phone has surfaced on Geekbench website revealing quite a few specifications of the upcoming smartphone. However the name of the phone is not known, the listing carries the codename of Xiaomi Cepheus.

As per the GeekBench listing via MySmartPrice, the Xiaomi Cepheus is powered by Qualcomm’s latest Snapdragon 855 octa-core chipset along with 6GB of RAM. 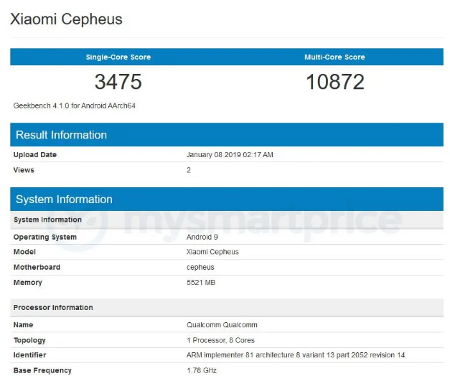 For the software, smartphone will be running on the Android 9 Pie based MIUI 10 out-of-the-box. In the Listing, the Xiaomi smartphone has scored 3,475 in the single-core test and 10,872 in the multi-core test.

Xiaomi is expected to release at least three Snapdragon 855 powered phones this year which includes Xiaomi Mi MIX 3 5G, Mi 9 and Mi MIX 4. It is said that the Cepheus phone could either be the Mi 9 or Mi MIX 4.

Xiaomi Mi 9 specs were leaked recently as per which the Xiaomi Mi 9 will feature a 6.4-inch full-HD+ AMOLED display with 19:9 aspect ratio an in-display fingerprint scanner. It is said to be powered by the Snapdragon 855 SoC. It will start with 6GB of RAM and 128GB internal storage. It will be backed up by a 3,500mAh battery with 32W fast charging support and will run Android 9 Pie with MIUI 10 on top.

For the camera, Xiaomi Mi 9 will sport a triple rear camera setup – with one 48-megapixel Sony ImX586 sensor, a 12-megapixel telephoto lens and a 3D TOF sensor as well. For the front, the smartphone will feature a 24-megapixel Sony IMX576 sensor.