Xiaomi has announced that the 11T series will support 3 years of major OS upgrades and 4 years of security patches. 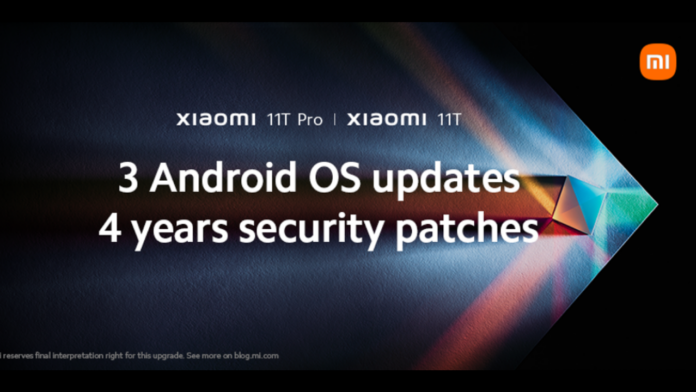 Xiaomi is set to launch the Xiaomi 11T series on September 15. Days ahead of the launch, the brand has confirmed that the phones will receive three major Android OS upgrades with four years of security updates.

The confirmation comes from the Head of Product & Technology at Xiaomi, Albert Shan. He said, “With the continuous improvement made to smartphone hardware, the life cycle of a smartphone is gradually lengthening, meaning users aren’t required to replace their smartphones as frequently”.

“For this reason, more consumers place great importance on receiving the latest operating system updates, along with the latest features. Xiaomi is committed to providing users with industry-leading hardware and lasting performance”, he added.

However, there’s a catch. Compared to Samsung, who said that it would also provide three years of OS upgrades to its older flagships, Xiaomi is playing it safe. The company says that it will provide extended upgrades only to the Xiaomi 11T series and above.

However, Shan does add that Xiaomi is currently evaluating the possibility of bringing the extended Android system and security upgrades services to more Xiaomi devices.

With this confirmation, Xiaomi has joined Samsung and OnePlus in providing extended upgrades to its flagships.

For the Xiaomi 11T series, the brand has confirmed that one of the smartphones in the series will come with 120W fast charging. The 11T Pro could be backed by a 5000mAh battery.

In addition, the marketing renders of the devices have also been leaked, which suggest the Xiaomi 11T Pro will have a 108MP sensor. The 11T, on the other hand, may have a 64MP primary sensor. The Xiaomi 11T Pro could come with a 120Hz OLED display while the vanilla 11T will also have a 120Hz refresh rate screen.

It is unclear whether the smartphones will have MediaTek Dimensity 1200 SoC or the Snapdragon 888 SoC. Both smartphones are rumored to arrive in configurations such as 8 GB RAM + 128 GB storage and 8 GB RAM + 256 GB storage. Both the phones should have 5G, NFC, Wi-Fi 6, Bluetooth 5.2 and run on Android 11 based on MIUI 12.5.